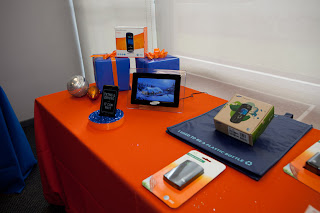 Some of the products that AT&T will market this Christmas season. (Credit: AT&T)

AT&T de Puerto Rico recently held its “Product Showcase” event at its Guaynabo headquarters to unveil the variety of smartphones and consumer electronics it will be marketing during the holiday season.

The inventory featured a variety of the latest phones, including several “eco-friendly” items — the Samsung Evergreen handset and the iGo Green portable battery charger — and the latest releases by Research in Motion (makers of Blackberry), Motorola, Samsung and HTC, featuring the new Windows 7 operating system. Many of the new arrivals feature the wildly popular Android platform as well.

AT&T is also including in its offer a number of electronic products, namely the iPad — which it has been selling since Apple launched the product earlier this year — the Dell Inspiron Mini netbook and the Samsung Galaxy Tab. AT&T is also marketing several sound systems by iHome, good for iPods and iPhones.