Gov. Alejandro García-Padilla and Caguas Mayor Willie Miranda Torres at the signing earlier this year of an accord to get the proposed Novotren rail system between San Juan and Caguas off the ground. 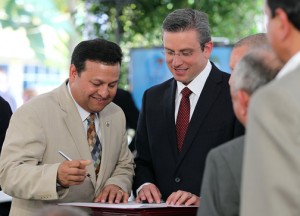 Gov. Alejandro García-Padilla and Caguas Mayor Willie Miranda Torres at the signing earlier this year of an accord to get the proposed Novotren rail system between
San Juan and Caguas off the ground.

The $400 million Caguas-San Juan Commuter Rail, known as Novotren, is one of the most significant projects for Gov. Alejandro García-Padilla’s administration, and calls for the P3 Authority to work together with the Department of Transportation and Public Works, the Puerto Rico Highways and Transportation Authority, and the Autonomous Municipality of Caguas.

To proceed with the next phase, the P3 Authority selected Behar-Ybarra & Associates, among the eight international and local proposals in response to the RFP for the technical advisory services. Two other companies Steer Davies Gleave and Ames & Gough, were integrated to the technical advisory group to prepare the project’s revenue and ridership studies and oversee insurance and risk management issues, respectively.

“The next step will be to continue the financial and technical due diligence, including market soundings and outreach with potential proponents, completing the environmental evaluation process and the evaluation of systems and technology options,” the P3 Authority said in a recent update of the projects.

As to the construction of adult male and adult women correctional facilities, Kevane Grant Thornton was selected as the financial and procurement advisor.

“At this time the [P3 Authority], its financial and technical advisor, along with the public sponsor of these projects, the Department of Corrections and Rehabilitation are conducting the due diligence to define the scope of the projects and drafting the Desirability and Convenience Studies required under the Public Private-Partnerships Act and Regulations, to begin the procurement process,” the agency said.

The P3 Authority board also approved to contract Aird & Berlis LLP as legal advisors and Caribbean Project Management as technical advisors for the procurement process of both projects. Last August, the agency announced Grant Thornton as the financial advisor for the correctional facilities projects.

“This project may include a long term contract for the supply of all the liquid natural gas required for several of PREPA’s power plants or the long term supply of LNG for the northern plants,” the agency said. “[In recent] months, PREPA conducted a request for information and interest with different industry entities.”