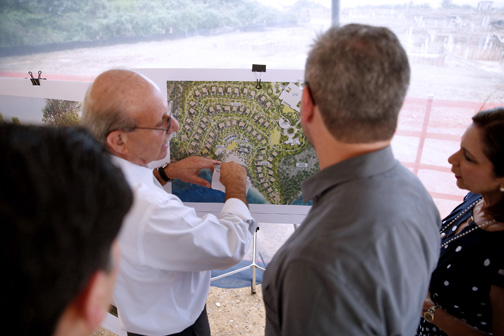 More than two decades after hotel and government officials unveiled the project with much fanfare, Gov. Alejandro García-Padilla headed a groundbreaking ceremony Wednesday for the Four Seasons-Cayo Largo hotel in the Eastern town of Fajardo

The $230 million luxury boutique hotel will sit on a 640-acre stretch of land and will open in late 2018. It will feature 150 rooms and will generate 400 jobs during construction and 400 jobs in its operation, officials said Wednesday.

“As some of you will recall, several years have passed since the initial announcement that a new hotel would be built here,” García-Padilla said.

“However, legal and financing problems, and a lack of permits stalled construction, to the point that they had to demolish the original infrastructure. All that’s being left behind; Cayo Largo is reborn today,” the governor said.

What was there was an almost completed 314-room structure that featured typical resort amenities such as restaurants, pools, a casino and a spa and golf course. That structure entailed a $195 million investment in 2001 by the original owners, a group that included former Puerto del Rey Inc. President Dan Shelley, Fuentes Construction Co., V. Suarez & Co. CEO Diego Suarez Jr., and executive Manuel H. Dubon.

Their plans called for building the posh property and branding it a Four Seasons Resort. However, permitting and environmental concerns plagued the project, which got tangled up in courts for several years.

In 2013, property executives predicted that the new hotel would be ready to operate in 2017, which would have marked a decade since Flagship Services Corporation purchased the property with partner DLJ Real Estate Capital, as this media outlet reported.

Developer: Cayo Largo hotel in Fajardo to open in ’17