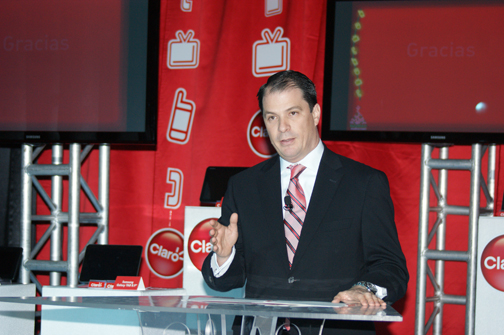 Wireless provider Claro announced it is dropping the price of its basic Internet service to $20 a month to provide an entry-level alternative to that segment of the population that may not be able to afford a costlier option.

That monthly rate will buy download rates of 512 kilobits per second, the lowest speed considered under the definition of broadband spectrum. That option, plus giving customers the ability to purchase a computer or mobile data device on credit for as low as $9 a month, is Claro’s bet to sign up the island’s disconnected population, said Claro President Enrique Ortiz de Montellano, during a product showcase Monday.

“Most of the time the barrier to accessing the web is not having money to buy the equipment. So we offer the option of financing the device,” he said, mentioning that computers, laptops and tablets are all included in that extended payment option.

“The strategy is to continue to help those customers to get an economical and financed computer,” he said. “For the $29 that we used to charge for Internet alone, clients can now get Internet access and the equipment.”

Bridging the digital divide, a chronic issue in Puerto Rico, has been the focus of recent attention. The island’s broadband penetration rate currently hovers at about 31 percent, according to the Chief Information Officer’s statistics. The same gap is seen in Puerto Rico’s wireless penetration rate, which at 81 percent is among the lowest in the hemisphere. That said, Ortiz de Montellano said Claro is also including pricier smartphones under the payment plan option.

“We just don’t want the economic issue to be the barrier for growth of Puerto Rico’s wireless penetration rate, which is the lowest in Latin America,” he said, referring to the island’s 81 percent wireless usage rate.

Claro unveiled Monday the products lineup it will be marketing this Christmas season that includes the Nokia N9, the Motorola Razr, the HTC Incredible S, the LT Optimus Black and three Blackberry models: the 9360, the 9860 and the 9900. Also in the mix are the Samsung Galaxy Tab 8.9, the Sony Tablet S, the Motorola Xoom and the Blackberry Playbook.