Washington headquarters of the Export-Import Bank of the United States. (Credit: Larry Luxner) 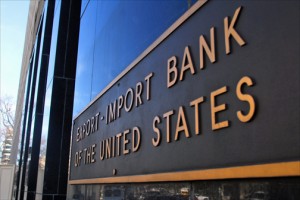 Washington headquarters of the Export-Import Bank of the United States. (Credit: Larry Luxner)

WASHINGTON — What do the World War II-era Burma Road, the 30,000-mile-long Pan-American Highway linking Alaska to Argentina, a $120 million aluminum smelter in Ghana, and a $3 billion liquefied natural gas project in Papua New Guinea have in common?

All were largely financed by the Export-Import Bank of the United States, a federal entity that since 1934 has supported $550 billion worth of U.S. exports to developing markets worldwide. The independent export credit agency, which enjoyed bipartisan support for decades, provides financing for U.S. companies to sell their goods and services abroad, in an effort to boost jobs at home.

But critics on Capitol Hill call the Ex-Im Bank a form of “crony capitalism” that helps big business at the expense of smaller companies. Tea party Republicans have made shutting down the bank their cause célèbre and are fighting a bipartisan bill that would renew the bank’s charter for another seven years.

If it doesn’t pass, the Ex-Im Bank will cease operations after Sept. 30 — which is just fine with incoming House Majority Leader Kevin McCarthy (R-Calif.), a moderate Republican who surprised the business community by coming out against the bank when took the leadership position in June.

“One of the biggest problems with government is they go and take hard-earned money so others do things the private sector can do,” the second-most powerful House Republican told Chris Wallace of Fox News. “That’s what the Ex-Im Bank does.”

McCarthy seems to have joined ranks with Jeb Hensarling (R-Texas), chairman of the House Financial Services Committee, who denounces the bank as corporate welfare: “If you’re a politically connected bank or company that benefits from Ex-Im, no doubt you would like it to continue. After all, it’s a sweetheart deal for you. Taxpayers shoulder the risk and you get the reward,” Hensarling testified at a recent hearing. “Ex-Im effectively taxes you while subsidizing your foreign competitors.”

Added Tim Phillips of Americans for Prosperity, one of several prominent outside conservative groups hoping to kill the bank: “This is an entity that rewards having buddies and friends in high places, and that’s what it is about.”

But Fred Hochberg, chairman and president of the Washington-based bank since 2009, says that’s not at all what it’s about (and quite a few Republicans agree with him).

“There’s a lot of misinformation about the Ex-Im Bank,” he said. “We support jobs and provide financing when the private sector is unable to step in. We help ensure that American companies can go head-to-head with their competition — all at no cost to taxpayers. But there’s still a core of people who are opposed to us.”

In July, a group of 31 governors — including the governors of Puerto Rico, Guam and the U.S. Virgin Islands — sent Congress a letter urging reauthorization of the bank, saying that their states and territories benefit from exports and that “Ex-Im allows our companies and workers to compete on a level playing field against our competitors.”

Meanwhile, other nations such as China and Canada readily support their own export-credit agencies, putting American firms at a disadvantage if they were to lose theirs. The Ex-Im Bank says it focuses on “markets where U.S. companies are competing against foreign rivals that receive subsidies from their own governments.”

“For many years, the bank has been referred to as the lender of last resort. The local bank may not be familiar with exports, foreign trade or letters of credit. We fill that gap,” Hochberg explained. “There are 59 other export credit agencies around the world that are trying to compete. The Chinese have three banks that support their exporters. Some only have one. Japan has two. Other countries are very much invested in supporting jobs at home, and I haven’t seen any indication they’re reducing their activities. If anything, they’re redoubling their efforts.”

In addition, Ex-Im advocates say the bank gives taxpayers plenty of bang for their buck (last year the bank actually returned an extra $1 billion back to the government and its default rate is 0.2 percent, better than most private banks). Sens. Joe Manchin (D-WV) and Mark Kirk (R-IL), co-sponsors of the Senate bill to keep the bank going, said in a recent joint statement that the Ex-Im Bank has supported nearly 1.2 million private-sector U.S. jobs since 2009, including 205,000 jobs in fiscal 2013 — and that the bank is a self-financing entity that operates at no cost to taxpayers.

The two senators also sought to debunk claims that the bank favors big businesses over small ones, noting that in 2013, it financed a record 3,413 small businesses, which amounted to almost 90 percent of the bank’s transactions.

“In the past five years, the bank financed more small businesses than the prior eight years combined,” said their statement. “Constituents in our home states of West Virginia and Illinois have told us that, without Ex-Im Bank services, their small businesses would have no opportunity to participate in lucrative export markets.”

Puerto Rico benefits
In Puerto Rico, B&B Manufacturing of Bayamón said it has been using Ex-Im’s small business export credit multi-buyer policy for the past 15 years to extend credit to its overseas buyers. The company, which was established in 1985 and makes wiring and electronic equipment for motor vehicles, relies on exports to Latin America and the Caribbean for half its sales.

Hochberg pointed out that both parties have traditionally backed the bank during its 80-year existence, re-authorizing it 15 times, usually just with a voice vote. In 2012, though, tea party conservatives began questioning the bank’s usefulness. Nevertheless, after some reforms were included, the House voted 334-93 to keep the bank going for another three years; in the Senate, the vote was 78-20. At that time, lawmakers also boosted Ex-Im’s lending cap to $140 billion — where it’ll likely stay in the event the bank survives, even though the White House requested that it be raised to $160 billion.

“We did have broad bipartisan support in the past, and we have bipartisan support now, but the challenge is greater now,” Hochberg said. “It’s a more vocal debate, and it’s frankly spread overseas. I just came back from a trip to Singapore, Indonesia, China and the U.K., and the subject came up at every stop.”

Larger companies are also emphasizing the local, trickle-down benefits of the bank. During a State Department-sponsored trip for D.C.-based ambassadors to Seattle in late June, top Boeing officials told the foreign diplomats that the Ex-Im Bank plays a vital role in helping Boeing maintain market share against European rival Airbus — which, in turn, is crucial for U.S. small businesses.

“We cannot lose the Ex-Im Bank. I don’t understand why we’re even having this debate. Tens of thousands of jobs could be lost as a result of this,” warned Raymond Conner, president of Boeing Commercial Airplanes. “I urge you all to communicate to your congressmen and senators that [the bank] is critical for our competitiveness. It supports American companies and American jobs, and it makes money.”

But one of the biggest complaints about Ex-Im is that its top benefactors are self-sufficient corporate giants like Boeing, General Electric and Caterpillar. The Competitive Enterprise Institute, a libertarian group opposed to the bank, cited the example of airline lending to show that Ex-Im favors some businesses while hurting others.

Trade groups lobby for permanence
Even so, both small business owners and powerful groups like the U.S. Chamber of Commerce and the National Association of Manufacturers have been lobbying to keep the bank in business — in effect, pitting them against Republicans who are normally viewed as friendly to their interests.

In June, the Wall Street Journal reported that the bank had suspended or removed four officials as part of an internal investigation into allegations of improper gifts and kickbacks. One of them, Johnny Gutierrez, was reportedly placed on leave for taking bribes in exchange for attempting to help a Florida company get federal financing to export construction equipment to Latin America.

Asked about that, Hochberg — who ran a family business for 20 years before joining Ex-Im Bank — said he has “zero tolerance” for corruption.

“We have a highly ethical culture and a whole set of procedures to detect fraud,” he said. “There were four employees cited in that article. In each case, [the allegations] were brought to the attention of the ethics officer. That’s how these things came to light. You’re never going to have zero incidents.”

William E. Brock III, a former Republican senator from Tennessee, U.S. trade representative and President Reagan’s secretary of labor, argued that the bank’s flaws are a reason to improve it, not get rid of it. That’s what Reagan did when he supported an extension of the Export-Import Bank despite opposition from fellow Republicans.

“The bank is particularly important today, when tight credit allocation by banks — still cautious after the recession, has left many companies, especially small and medium-size ones, unable to find financing to sell their products abroad,” Brock wrote July 28 in the New York Times. “Many foreign businesses receive credit financing from their own export-import banks, at levels unseen in the United States. Those foreign export-import banks aren’t going away; if anything, they will grow more important as the global economy continues to integrate.”

But if the tea party gets its way, Hochberg may be jobless come Oct. 1, along with his 400 employees. That’s partly why he taking the threat to disband Ex-Im so seriously.

“As soon as President Obama was elected in 2012 — even though we had been re-authorized only six months earlier — we began working with members of Congress on the next authorization,” he told us. “This would be very devastating [if the bank’s charter isn’t renewed], but I’m confident we’ll come to a solution.”