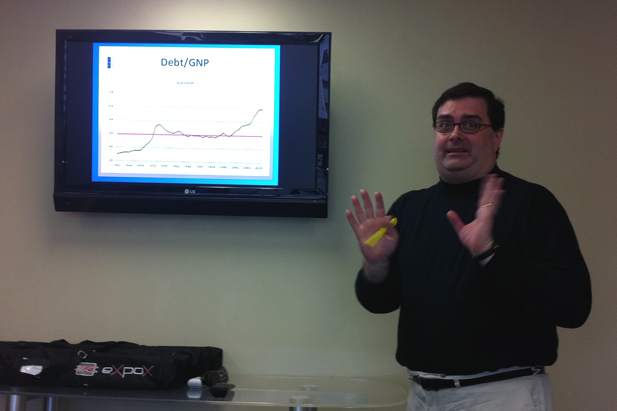 The approved plan to increase the United State’s debt ceiling will not solve the country’s fiscal problem, and could actually worsen it by reducing economic activity on the short- and mid-term, Sergio Marxuach, policy director for the Center for the New Economy said Tuesday.

Furthermore, he said the approved spending cuts and other fiscal changes are “bad news for Puerto Rico,” Marxuach said, given that federal funds constitute 22 percent of the local government’s consolidated resources for fiscal 2012.

Following several tension-filled last couple of days, on Tuesday Congress finally agreed to increase the amount of debt the federal government can issue to between $2.1 trillion and $2.4 trillion, and to significantly slash government spending over the next decade. President Barack Obama quickly signed it, avoiding an unprecedented national default.

Throught the bi-partisan agreement, the federal government’s debt ceiling increases by some $400 billion immediately and another $500 billion after September. The ceiling will increase by between $1.2 billion and $1.5 billion by the end of the year, as long as Congress approves additional spending cuts adding up to at least $1.2 trillion.

“The magnitude of the U.S.’s fiscal problem is simply monumental. Even if the approved agreement is strictly followed, the country’s debt will still increase by $7.3 trillion by 2021,” Marxuach said. “That’s so because the agreement does not increase collections and does not propose reforms to the Social Security, Medicare, and Medicaid programs.”

“Although we do not know which specific programs will be cut, to the extent that these federal resources are cut, the government of Puerto Rico will have to replace them locally, and the general fund, even with the revenue generated by the new 4 percent excise tax, is very compromised,” Marxuach said. “In fact, you could say that the government currently lacks sufficient resources to meet all its obligations and what it has promised the people.”

Another significant clause in the agreement is the $15 billion increase to crack down on fraud in federal programs such as Social Security, Medicare, Medicaid and the State Children’s Health Insurance Program. By eliminating misuse of funds, the government is expected to generate $16 billion in savings.

The agreement reached between Congress and the White House will not contribute significantly to the country’s economic growth over the next decade.

Click HERE to read the CNE’s full analysis in Spanish.