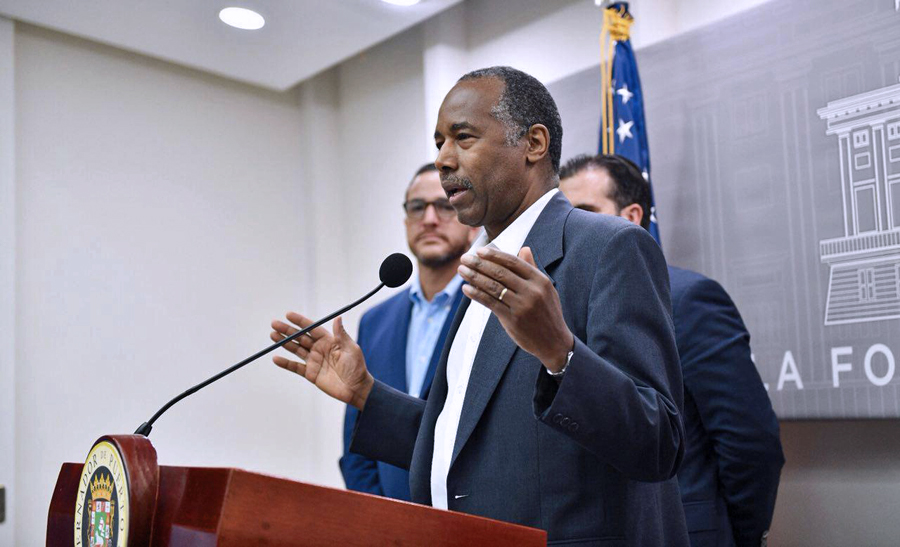 U.S. Department of Housing and Urban Development Secretary Ben Carson and Gov. Ricardo Rosselló announced the formal execution of a $1.5 billion grant agreement to help citizens in Puerto Rico to recover from Hurricanes Irma and María.

The signing of the grant agreement now paves the way to speed recovery dollars needed to restore damaged and destroyed homes, businesses and infrastructure, they said during a news conference at La Fortaleza.

“Today, HUD and Puerto Rico are moving forward to speed recovery on the island,” said Carson. “Now that we have a framework in place, implementing Puerto Rico’s disaster recovery program can move full steam ahead.”

“We’re grateful for the great working relationship we have established with the Department of Housing and Urban Development and for their continuous consideration in terms of the housing, infrastructure, and economic revitalization needs of the American citizens living in Puerto Rico,” said Rosselló.

“The island continues to recover from the passage of hurricanes Irma and María, but with the trust and support of HUD we will definitely rebuild better and stronger than ever,” he added.

To distribute the funds, the Act requires HUD to direct the funds to the areas most impacted by last year’s major disasters. On Feb. 1, 2018, HUD allocated $1.5 billion of that appropriation to Puerto Rico to address the serious unmet needs on the island. The action plan approved Thursday will put these funds to work, government officials said.

On April 10, 2018, HUD allocated another $18.5 billion to further support recovery in Puerto Rico and to rebuild communities impacted by Hurricanes Irma and María “and to protect them from major disasters in the future.”

HUD will soon publish program rules to guide Puerto Rico and others on the use of those funds, officials said.

CDBG-DR grants support a variety of disaster recovery activities including housing redevelopment and rebuilding, business assistance, economic revitalization, and infrastructure repair. Grantees are required to spend the majority of these recovery funds in “most impacted” areas as identified by HUD. HUD will issue administrative guidelines shortly for use of the funds to address grantees’ long-term recovery needs, particularly in the area of housing recovery.