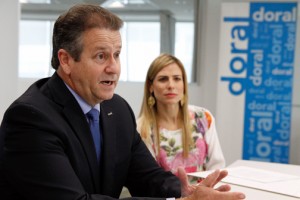 The division currently focuses on mortgage insurance, but by next month should be ready to unveil a structure that includes life, health and auto protection plans, he said during a roundtable discussion with members of the media Wednesday.

The idea is to use its 115,000 mortgage customers — 30,000 or so of which have some type of other business relationship with Doral — as a springboard to cross-sell additional products.

“When you have more than 115,000 mortgage customers, the potential for cross-selling other types of products is huge. When you have a strong mortgage franchise, the logical relationship to have is with insurance,” he said. “But our goal is to also go beyond our own customers and reach potential clients outside Doral.”

While Doral prides itself on its “core” mortgage business, the fact remains that bad loans have been on the rise as consumers clobbered by a depressed economy have had to default on their obligations.

Late last year, Doral’s stock took a nosedive in the wake of $32.5 million in third-quarter losses and a warning from the New York Stock Exchange of a possible delisting. At the time, bank executives attributed the downward spiral to bad mortgage loans, but also said they had been helping many clients re-balance their household income and obligations so they could keep their homes.

While an unspecified number of them re-defaulted, Doral’s mortgage loan production in Puerto Rico grew 21 percent, from $209.4 million in the second quarter of 2012 to $254.3 million in the third quarter of 2012. From January to September 2012, Doral processed $861 million in mortgage applications, up about 50 percent from the $572 million recorded for the same period in 2011.

Beefing up mobile banking, ATM network
During the sit-down, Méndez also discussed Doral’s plans for its retail banking segment, including deploying an enhanced mobile platform sometime in the third quarter to enable customers to perform transactions from their devices, including smartphones and tablets.

The services include a “remote deposit capture” feature, which will allow Doral clients to scan and deposit their checks by using their device.

“Technology is going to make life more interesting and simpler for our clients,” he said.

Meanwhile, the bank plans to add 20 new ATMs to its already 130-strong network, to reach customers beyond the San Juan metropolitan area. Although Méndez was unspecific regarding where those machines will be installed, he did say the plan is to reach clients “in more distant areas.”

Méndez said growth is also on the horizon for Doral’s stateside business as well. In Florida, Doral has six branches and is adding another in coming months.

In New York, Doral is concentrating on commercial real estate, “a business that has been in high demand,” Méndez said.

Today, Doral is launching its newest institutional campaign, spending $500,000 to encourage island residents to share their hopes for Puerto Rico through its social media platforms.