Men in a small tugboat row past the giant Singapore-registered Wan Hai 225 cargo ship as its containers are unloaded by cranes at Taiwan’s southern port of Kaohsiung. (Credit: Larry Luxner) 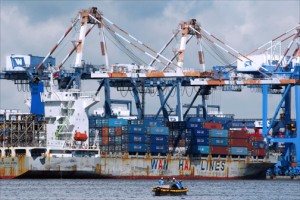 Men in a small tugboat row past the giant Singapore-registered Wan Hai 225 cargo ship as its containers are unloaded by cranes at Taiwan’s southern port of Kaohsiung. (Credit: Larry Luxner)

TAIPEI — Both are relatively tiny islands that have complicated relationships with the giant superpowers that claim them. Both use tax incentives to lure U.S. factories to their shores — despite the absence of full-fledged embassies in Washington — and the political status of both islands is a never-ending source of debate among local voters.

And that’s where the similarities between Puerto Rico and Taiwan end.

Taiwan, also known as the Republic of China, has 23 million people crammed into its 13,887 square miles, making it the world’s most densely populated country (excluding Asian city-states and European mini-states) after Bangladesh. That’s even more crowded than Puerto Rico, home to 3.7 million inhabitants.

Puerto Rico, by comparison, has no real skyscrapers to speak of. The Caribbean island is losing population, its main port is seeing a decline in cargo traffic and its economy is in free fall, with unemployment at 13.8 percent and GDP expected to shrink by at least 1 percent this year.

Remarkably, in the early 1950s, poverty-stricken Puerto Rico and Taiwan had roughly the same per-capita income. But today, Puerto Rico’s annual per-capita GDP of around $15,000 is less than half that of the poorest state, Mississippi, while an estimated 45 percent of Puerto Ricans live below the poverty line. In contrast, Taiwan’s GDP now exceeds $21,000 and its healthy economy is expanding every year.

Perhaps Puerto Rico may have a few things to learn from the Republic of China, as this reporter discovered during a week-long press trip there in late June. On the journey were correspondents from the Dominican Republic, El Salvador, Guatemala, Panama, Honduras and Belize — all of which are among the 22 countries that officially recognize Taiwan — along with journalists from Brazil, Canada, Chile, Colombia, the United States and several Arab and Asian countries that recognize China instead.

Yet diplomatic recognition matters little these days, it seems.

“For more than 50 years, most of Central America has recognized the existence of Taiwan. Costa Rica recognized us for 63 years,” said Victor Chu, senior secretary of MOFA’s Department of Latin American and Caribbean Affairs. “We appreciate this kind of relationship, but you cannot say that means we have more business or investment from those other countries. We have lots of investment in Vietnam, for example, but no diplomatic relations with them.” Cynthia Kiang, deputy director-general of Taiwan’s Bureau of Foreign Trade, said her office employs 400 people on the island and also has 58 overseas branches that promote doing business with Taiwan.

“Although our trade with Central America is not as great as with other regions, these allies are very important for us, because they’re one of the prime destinations for our own businesses to export to North America,” she said.

In 2012, Taiwan’s commerce with Panama, Guatemala, Nicaragua, El Salvador and Honduras — all of which have free-trade agreements in place — totaled $778.35 million. That was a 107 percent increase over 2003 figures.

By comparison, trade with Puerto Rico came to $383.5 million, of which $56.4 million were imports and $327.1 million were exports to Taiwan, according to MOFA. That made the island Taiwan’s 49th biggest source of goods, ranking Puerto Rico right behind oil-rich Equatorial Guinea and just ahead of Pakistan.

But that depends on whose statistics you believe.

The Puerto Rico Planning Board’s import numbers are consistent with those of Taiwan, though its figure of $210.7 million in exports to the island is $116.7 million less than what MOFA reported for 2013.

In June 2013, a delegation of five Taiwanese companies visited Puerto Rico as part of a trip arranged by the Puerto Rico Trade and Export Co. (PRTEC) and Taiwan’s External Trade Development Council. The group represented a cross-section of business sectors including the paper industry, industrial machinery, adhesive tapes, energy and building materials.

The event included 45 business meetings as well as a seminar between University of Puerto Rico officials and Taiwan’s commercial counselor in the Dominican Republic, which hopes to establish a student exchange program between the two islands.

Yet, as with so many other aspects of world affairs, Puerto Rico seems to fall through the cracks due to its unclear status as neither a state nor an independent country.

“We haven’t thought about having a special relationship with Puerto Rico, because it’s part of the United States,” said Joy Lee, assistant director-general at MOFA’s Department of North American Affairs. “Even the congressman from Puerto Rico in Washington doesn’t have the right to vote. But can Puerto Rico learn from Taiwan? Absolutely. We have worked with a lot of countries.”

Over the last 60 years, Taiwan has averaged around 7.3 percent annual growth, and until 1995, its unemployment rate stayed under 2 percent. Currently, the island is one of the world’s biggest producers of IT products, with Taiwan enjoying the world’s biggest market share of tablet PCs, motherboards, notebooks and optical disks.

But it wasn’t always that way.

Then in the 1960s — about the time Puerto Rico’s Operation Bootstrap was in full swing — Taiwan began making use of tax deductions and incentives to develop foreign investment. It also set up industrial zones and launched huge construction projects such as harbors, airports and a high-speed train system linking Taiwan’s major cities, as well as world-class shipbuilding and petrochemical industries.

In the 1980s and 1990s, Taiwan switched its efforts from labor-intensive to technology-intensive industries, and in 2002 it finally won hard-fought membership in the World Trade Organization. Cheap T-shirts for sale at the Raohe Street Night Market in Taipei.

Global showdown
In 2009, the global slowdown caused Taiwan’s economy to shrink briefly, though it quickly rebounded and is expecting 3 percent growth this year. Taiwan currently ranks as the 11th most competitive economy worldwide, said Esther Lee of the Taipei-based National Development Council, a central planning body made up of cabinet officials.

“We used to have very low unemployment, but the story totally changed in 2008, when it hit a record 6 percent. We could never imagine this would happen to us,” Lee told the visiting journalists. “After that, the government passed a lot of measures to encourage the private sector to create jobs. Since then, our unemployment rate has dropped to around 3.9 percent, but for this it is only satisfactory, because for those aged 20 to 24, unemployment is triple the overall rate.”

Since 1949, the communists have considered Taiwan to be a breakaway province of China; officially, Beijing still talks of eventual unification. And despite a dramatic improvement in cross-strait relations over the past few years, China still has more than 1,000 ballistic missiles deployed along its southeastern coast, aimed directly at Taiwan.

Largely for that reason, a vote for Taiwanese independence seems even more unlikely than an independentista victory in Puerto Rico. The current government actively discourages such talk, and any outright declaration of Taiwan independence would be viewed by Beijing as an act of war.

“Taiwan’s relations with China are evolving, but in which direction and in what way, nobody knows,” said Manfred P.T. Peng, director-general of MOFA’s Department of International Information Services. “We are molding our future every day. We have had referendums pro and con, but the status quo is supported by around 80 percent of our people.”

Said one political analyst who asked not to be identified: “Taiwanese society has become very polarized. The pro-independence base is at more 45 percent. It can never go over 45 percent. Many people believe we are already independent, by any standard. But it would be impossible — in the next 50 years or even in the next 100 years — to declare an independent republic of Taiwan, because it would mean immediate war. That’s why most people today prefer the status quo. Mainland China kind of acknowledges that. Both sides agree to disagree, and have set aside this issue so we can improve our economic relationship. So far, it’s going in the right direction.”

Moving too fast
Some worry that, in fact, Taiwan is moving too fast to integrate itself with the much larger Chinese economy. China is already Taiwan’s top trading partner, accounting for 21.6 percent of the island’s $305 billion export market last year, and 15.8 percent of its imports.

MOFA’s Kiang said Taiwan’s recent decision to target eight countries — Brazil, Egypt, India, Indonesia, Mexico, Myanmar, Russia and Vietnam — is in accordance with the government’s efforts to diversify its trade following the financial crisis that devastated much of the world’s economy six years ago.

“Before 2008, our trade was mostly concentrated in the United States, China and EU countries. However, after the financial crisis, we have noticed that some emerging markets have great potential and were not that badly affected,” Kiang told the visiting journalists.

Things have definitely changed since May 20, 2008, when Ma Ying-jeou took over Taiwan’s presidency from his predecessor, Chen Shui-bian. Within three months of taking office, Ma launched direct weekend charter flights between the People’s Republic and Taiwan, opened the island to mainland Chinese tourists and eased restrictions on Taiwanese investment in mainland China.

As a result, last year 2.8 million Chinese citizens visited Taiwan on tourist visas, cramming such popular tourist attractions as Taipei 101 and the National Palace Museum. Likewise, 5.3 million Taiwanese visited China in 2013 — up from two million in 2007. That year, there were no flights at all linking the two Chinas; now, 858 scheduled flights cross the Straits of Taiwan each week. A direct flight from Taipei to Shanghai now takes only 90 minutes, compared to the six or seven hours a passenger would have spent flying that route via Hong Kong just a few years ago.

“The previous administration had very bad relations with China,” said Peng. “Chen Shui-ban adopted a hostile policy towards China, so the Chinese government hated him and tried to prevent Taiwan from having any relations with foreign countries. They tried to win every diplomatic ally of Taiwan, by any means.”

Ma, on the other hand, has a totally different approach to the mainland.

“Checkbook diplomacy doesn’t work anymore,” Peng said. “We have a gentleman’s agreement with mainland China: we won’t win allies to our side, and they won’t do it either. We no longer have to pay allies to stay on our side.”