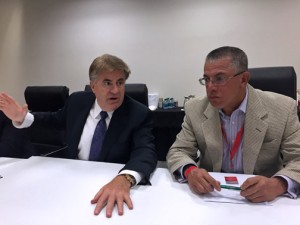 NEW YORK — Although Toyota has had a “fantastic reputation for value and quality,” a self-critical assessment has driven the automaker to work on “bringing the passion” out of its vehicles to appeal to a new generation of buyers, Bob Carter, the executive responsible for the automaker’s operations in North America, which include the U.S. mainland, Puerto Rico and Canada, said.

“While we’ve had this fantastic reputation of value and quality, some have felt Toyotas have been a little boring, so we’re working on more passionate design and more engaging driving and fun-to-drive aspects,” Carter said. “This is an exciting time for Toyota in North America and Puerto Rico.”

On Wednesday, during the first day of previews for members of the media and industry executives at the Jacob Javits Convention Center in Manhattan, Toyota rolled out three new models — the Prius Prime, the Highlander and the CH-R — that should be available at dealers sometime in the fall.

“In terms of a total company, I’m really enthusiastic about the direction we’re going. What you’re starting to see is a complete change in our platform philosophy, which we internally call ‘Toyota New Generation Architecture.’ The Prius Prime is the first vehicle to be rolled out on that new platform.”

Between now and the end of the decade, Toyota will be introducing that philosophy into all of its vehicles, with a proposed end result of “a much more engaging and exciting product line for our customers — from the top of the line, to the bottom of the line,” Carter said.

“These new platforms will always be grounded in what Toyota’s known for, high quality, high reliability, good MPG, and good value,” he said.

The CH-R is looking to grab a piece of the small SUV market, which last year grew at a rate of 20 percent both on the U.S. mainland and Puerto Rico. The vehicle is designed to appeal to younger buyers.

“The small SUV segment was the only category that showed any growth in Puerto Rico last year,” said Héctor Rivera, field operations director for Toyota de Puerto Rico. “Through February, the Toyota RAV4 held 20.2 percent of the market, with some 300 units sold a month.”

Since the introduction to the island of the hybrid version, it has become “one of the popular hybrid vehicles in Puerto Rico,” Rivera said.

However, generally speaking, the hybrid and electric vehicle segment has not taken off as aggressively in Puerto Rico as it has in some parts of the U.S. mainland. Some of that sluggishness has to do with the fact that if consumers see that a traditional vehicle, like a sub-compact or compact, will yield the same gas mileage, they will not spend the extra money on the newer technology, Rivera said.

Also, the infrastructure needed to support those types of vehicles has yet to be developed on the island.

This year, Toyota is looking to sustain its market share of about 33 percent on the island, which is on its 10th year of an economic recession that has severely affected new vehicle sales.

“Our focus is on slow and steady growth. We want to keep our dealerships focused on the business,” he said.