The new law establishes a 75 percent increase in allocations from the Puerto Rico Industrial Development Co. to the Trust over the next decade. This translates into an increase from as much as $5 million it receives now to up to $5.6 million from fiscal 2012 to fiscal 2016, and up to  $7 million in fiscal 2020-2021.

The law also provides a tax exemption on interest derived from any bond issue the Trust authorizes, tax deductions for contributions to the Trust, exemption of Sales and Use Tax on scientific materials, and a tax exemption over the first $250,000 in income that scientists or researchers generate under Law 1 of 2011.

The law also gives the Trust a separate legal identity from that of the trustees to facilitate efficiency in daily operations, Economic Development and Commerce Secretary José Pérez-Riera said upon announcing the governor’s move.

“Through this law, we have refined the Trust’s powers and internal structure to increase the types of activities that it can conduct,” Pérez-Riera said. “In addition, we created the Science District incentives and mechanisms so the Trust can develop the land within the district on par with other technology parks in the United States and other advanced jurisdictions in the world.”

An ambitious, overdue project
The Science District is a concept that has been in the works since 2006, when the Acevedo-Vilá administration unveiled ambitious plans to redevelop a zone of San Juan stretching from the University of Puerto Rico to the former Oso Blanco state penitentiary to include state-of-the art research laboratories, offices, retail, commercial and convention space, housing and green areas, all in an effort to capitalize on the island’s decades-strong inclination toward pharmaceutical and scientific development. 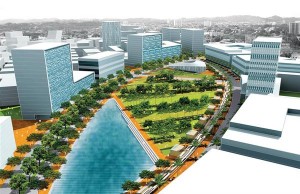 Under the new law, which has been at the heart of a controversy between the government and the Trust’s ousted Executive Director, Thomas Farb, will grant certain tax incentives to the Trust to develop the Science District.

“It also creates a stable source of income so the Trust has the ability to issue debt to finance the necessary infrastructure to promote the knowledge economy in Puerto Rico,” Pérez-Riera said.

Trustees react
Fabrizio Bonanni, a private-sector Trust board member and vice president of operations of biopharmaceutical company Amgen, said Thursday’s announcements are “all huge steps toward creating the ecosystem necessary to attract knowledge-based activities to Puerto Rico, such as research and development, thus facilitating that the Science, Technology and Research Trust finally fulfills its promise to Puerto Rico.”

The 75 percent increase in the government’s contribution to the Trust over the next ten years “will be instrumental for the Trust to achieve its goals,” said Bonanni.

Meanwhile, Gil Medina, another private-sector trustee, said the Trust has supported the government’s efforts to create the Science District, and the incentives granted through the newly inked law will “be key in attracting investors to help achieve make the Science District’s vision a reality.

“We believe this law is a big step in the right direction to achieve the Trust’s mission to continue bringing Puerto Rico closer to a knowledge-based economy.”