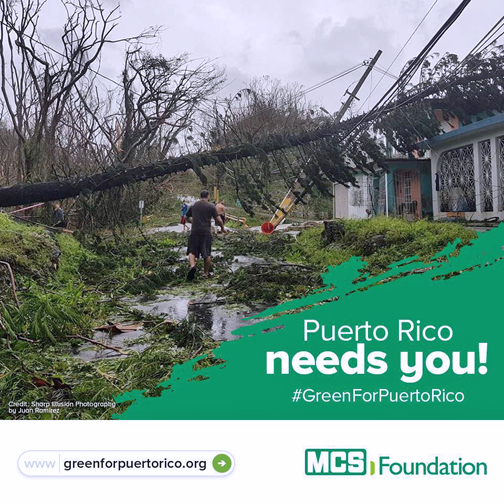 An anonymous $50,000 donation allows for the continuation of empowering island entities in providing services during the recovery, MCS Foundation says. An anonymous $50,000 donation allows for the continuation of empowering island entities in providing services during the recovery, MCS Foundation says.

The MCS Foundation announced it succeeded in reaching its new goal of $1.5 million, which was raised as part of the “Green for Puerto Rico” campaign launched in September 2017. Its objective is to help the island during its recovery phase after the passing of Hurricanes Irma and María.

However, it was an anonymous $50,000 donation that accelerated this $1.5 million achievement, which represents the second goal established by the Foundation.

Originally, the challenge was to raise $1 million, with MCS matching each dollar donated until this goal was reached. This time, $250,000 was collected in addition to the first million, which totaled $1.5 million after MCS’s matching funds, said Liana Marante-O’Drobinak, executive director of the MCS Foundation.

“We are more than grateful for the support of so many people, including MCS employees and business partners, as well as other organizations and the community in general,” she said.

“We would also like to recognize the support of this anonymous donor, who has trusted in the MCS Foundation, as well as Teddy Dupay — key people in making this achievement possible,” she added.

“We have already started delivering the donations to local entities in need of reconstruction after the hurricane, while also beginning to see the fruits,” said Marante- O’Drobinak.

“We are now evaluating additional proposals we have received, and will continue with our mission,” she added.

Entities such as the Instituto Psicopedagógico de Puerto Rico, Acción Social de Puerto Rico and the San Juan YMCA have already received donations for the reconstruction of their facilities after the passing of the hurricanes.

Recognizing that Puerto Rico still has a long way to go toward its recovery, the donated funds will continue to be allocated to projects related to the impact of these storms, while MCS matching funds will be assigned to more long-term initiatives, the nonprofit added.