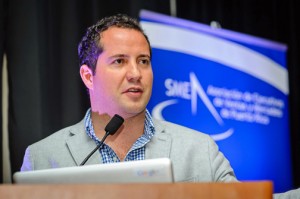 Today’s generation lives in a multiscreen world, where people are connected all day, to the point that they are called “Generation-C,” due to their digital and participatory nature, their link to mobile devices and the type of relationships they develop through the Internet.

Such were the conclusions offered by digital marketing expert Camilo Reina, a executive for Google, who discussed how a seemingly unstoppable digital revolution that directly impacts the way people interact, make decisions and communicate is changing the way marketing is done today.

“Consumers are not only on a computer during certain times of day, but are exposed to different screens and increasingly expect that the publicity they receive is relevant to their tastes and preferences,” he said during the Puerto Rico Sales and Marketing Executives Association recent “power lunch” gathering.

The trade group hosted Reina to discuss the new consumer relationship with brands and the importance of adapting to their behavior.

Therefore, deliving the product or service from the offline world to the online world is another important factor to consider before a discerning and informed consumer, even more informed than the salespeople themselves — a major challenge for which companies must establish the all-important digital connections, he said.

“This implies that part of the strategy entails focusing on the consumer’s context or their circumstances: time, distance and place,” said Reina, who leads education, relationship and development initiatives for Google in partnership with media and creative agencies in Colombia, Central America and the Caribbean.

Lastly, Reina said that to achieve their marketing objectives, companies not only have the challenge of delivering relevant ads or content to consumers, but also must identify the right time and the right device to connect effectively with them.

In May, the SME unveiled the findings of its study on Puerto Rican consumer behavior as it relates to digital media and mobile phone use, concluding an ever-growing trend. The study also showed that the number of people who connect via mobile devices is greater than those connecting via computers, at 70.3 percent to 62.9 percent, respectively.