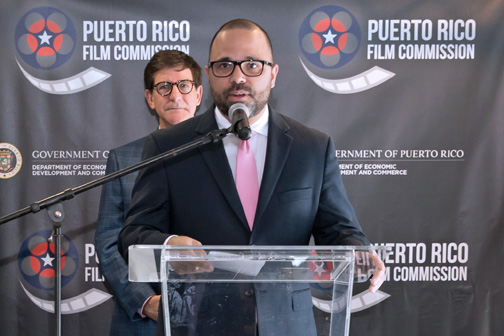 Puerto Rico’s film industry is set to generate $225 million for the island’s economy this fiscal year ending in June, with several television and film projects in the pipeline that will generate some 12,000 jobs, government officials said Sunday.

During the premiere of “The Oath,” a television series filmed entirely in Puerto Rico — before and after Hurricane María — Economic Development and Commerce Secretary Manuel Laboy said the production “produced a multi-million injection into the economy, and our desire is to continue to be chosen by production companies to give life to their creations.”

The film industry is one that produces effects on the short-term. It’s one Puerto Rico wants to grow, but it is something that will take time, Laboy said.

“We’ve been looking at the industry and the [incentives] program that we manage in a holistic way so we can achieve both economic development and fiscal responsibility,” he said. “So, there’s been talks about what will happen to the tax credits. This is an industry that, like others, depends on tax credits or tools like that so we can be competitive against Georgia, California or New York.”

“The question is, can we offer fiscal benefits that at the end of the day are both good for the business, for economic development, for the people of Puerto Rico when it comes to fiscal responsibility, and at the same time it makes business sense to the production companies,” he said.

“So since we took office in January 2017 we’ve been doing the analysis and believe that in an industry like this before 2013, it offered a 40 percent tax credit. We believe that’s the right thing. It provides actual data and return on investment to the Treasury Department. For each dollar we invest, one dollar comes back to Treasury,” Laboy added.

The 10-episode series will officially debut on March 8 via the Sony Pictures Television’s Crackle streaming platform. During a sneak-peek of the series pilot that aired at the Fine Arts Theater in Hato Rey, Puerto Rico’s scenery could be appreciated as the backdrop of the  production.

“Crackle has supported Puerto Rico’s mission to bring professional film and television and has been instrumental in the activity of our creative sector, creating thousands of jobs and an increase in occupancy in hotel rooms, which in turn generates an economic injection on the island due to increased consumption in restaurants and entertainment,” said Laboy.

John Orlando, Crackle’s senior vice president, programming and development/head of content, said the selection of Puerto Rico for the shooting of all chapters in this series was due to Puerto Rico’s “mystical beauty and diversity, combined with the friendliness of the residents on the island, the film community and fabulous scenery.”

A crew of about 4,000 locals was recruited for the production work that began last year and wrapped up after Hurricane María battered Puerto Rico last September. Australian actor Ryan Kwanten mingles with local actor and personality Braulio Castilo prior to the premiere of “The Oath” at the Fine Arts Theater.

Australian actor Ryan Kwanten, who plays the starring role in the series, said “everyone knows about the Puerto Rican spirit, but what is not as well-known is their audacious tenacity, this ability to get back on their feet after the island was so devastated.”

“To see this resolve, was a pleasure and a wonder to watch, and to be a part of. When we came back after María, there was an emotion to the set that I’ll never experience again in my life. It was so palpable,” said Kwanten, who participated in the first 10 episodes and expects to return to the island when filming for the next season resumes in May.

“Thirty percent of the crew that works with us still has no power, but you wouldn’t know it. You wouldn’t know anything is wrong, which is kind of enlightening to the spirit of the people down here and is very uplifting,” Perlman said. “You got a punch in the face, but got right back up.”