iPad apps taking a bite out of newspaper subscriptions 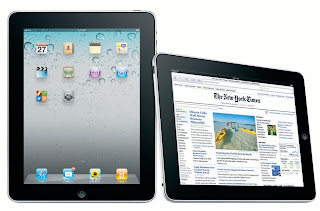 The study focused on how iPad consumers consume news content, concluding — among other things — that 84.4 percent of the people used the device to follow breaking news reports and current events. More than three-fourths of the participants said they spent at least 30 minutes per day consuming news on the gadget.
“The vast majority of those who read at least an hour’s worth of news on their iPads each day — more than nine out of 10 — said they are either very likely (71.8 percent) or somewhat likely (21.2 percent) to use a newspaper’s app for reading news and feature stories as opposed to using a Web browser to navigate the newspaper’s website,” according to the RJI poll released last week.
The answers were gathered from more than 1,600 iPad users who participated in a 20-question survey conducted between early September and late November. One of the key findings is that in terms of demographics, more than 80 percent of the responding users were well-educated, affluent men, between the ages of 35 and 64.
More than half of the participants — who are current print newspapers subscribers and use their iPad for at least an hour a day for news — said they are very likely to cancel their print subscriptions within the next six months, proving that newspapers must bump up their online and digital multiplatform presence.
Another finding showed that subscription price is a factor among users who decide to purchase a news app or newspaper subscription for their iPad. The price, they said, had to be lower than the print subscriptions for them to sign up.
“Users also indicated that they want a very easy-to-use and reliable app, with access to at least all the content available in the printed edition,” the survey said, adding that users said the news organizations that have come closest to meeting their digital expectations are The New York Times, USA Today, The Associated Press, and The Wall Street Journal.
The RJI exists to develop and test ways to improve journalism through new technology and improved processes. See full survey results at: http://bit.ly/elVTPx