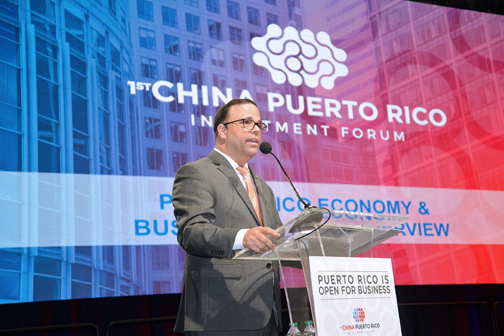 Manufacturing operations — including pharmaceuticals and medical device makers — have not given notice of plans to leave the island despite the hardship conditions Hurricane María left in its wake, Economic Development and Commerce Secretary Manuel Laboy said Monday.

“It’s certainly a risk, but so far, none have confirmed to us that they plan to leave,” he said in an interview with News is my Business.

Nearly a month after Hurricane María made landfall in Puerto Rico, leaving a catastrophic trail in its wake, the island’s manufacturing sector is slowly returning to its day-to-day operations, but on a limited basis.

“All of them are operating either on diesel or on power generators. The concern is that they’re not operating at the levels they should be to fulfill the global supply chain,” he said, echoing the apprehension expressed by the U.S. Food & Drug Administration earlier this month.

So far, the Puerto Rico Industrial Development Company, which Laboy also heads, has conducted an evaluation of 90 percent of its 224 industrial parks in Puerto Rico, to assess damage to buildings. He said the greatest problem identified has been damage to roofs, as well as to the power infrastructure and roads.

“We’re working with each of the tenants because we have to follow a procedure. First, we have to look at whether the private insurer applies, and in other cases, where PRIDCO’s insurance kicks in,” he said.

So far, he said PRIDCO has received a number of claims from several manufacturers, although he did not reveal names.

While closing is not on the short-term outlook, Laboy acknowledged that there is concern from the industry over the risk that Puerto Rico’s current situation — including lack of power and water — could continue affecting the global supply chain on the longer term.

Pharmaceutical and medical device manufacturers with operations in Puerto Rico produce the components for some of the world’s most consumed medications, so any disruption is felt worldwide.

He said for some companies, the problem is telecommunications, while for others it is the slow arrival of raw goods, including industrial gases.

“It’s a known fact that we can’t be in this situation for months. As in everything, there are windows of opportunity and if they begin closing, Puerto Rico becomes more vulnerable to having a company decide to leave in the short- or mid-run,” Laboy said.

As part of the evaluation process, PRIDCO is ready to offer its tenants breaks on their leasing terms, Laboy said.

The government is also looking to help is the small- and mid-sized business segment, which he said is “very vulnerable.”

That said, Economic Development and Commerce is hosting an event today around the slogan of “Create, Rebuild and Transform.” The agency will present participants tools and options to be able to deal with the emergency situation and refocus their business, whether through rebuilding or transforming, he said.

“In many instances, the problem is a lack of access to capital. They haven’t been able to put in their claims to their insurers. This activity focuses on showing them their options,” Laboy said.

For that purpose, the agency has recruited participation from the U.S. Small Business Administration, the Economic Development Bank for Puerto Rico, a private firm by the name of Kinetic — which offers credit lines that adjust to the business owner’s reality — and the Federal Emergency Management Agency.

So far, about 150 entrepreneurs have signed up for the event, which will be the first of several scheduled to take place in different towns.

Finally, Laboy confirmed that in November, both the Puerto Rico Labor Department and the Puerto Rico Planning Board should have their reports ready on Hurricane María’s impact on jobs and the economy.

“We’re going to take the hit on the short-term. I’m ready for it to be an extremely complicated situation in the short-term and as long as people continue leaving, the situation will be more complicated. We have to see then what we have to do to mitigate that, so that results in the middle- and long-term are positive,” Laboy noted.