The closing is expected to affect about 500 Pfizer employees in Barceloneta. (Credit: © Mauricio Pascual)

As part of a global effort to better align manufacturing capacity with the future needs of its business, Pfizer announced Wednesday the phased shutdown of its Barceloneta manufacturing plant by the end of 2017.

After a thoughtful review, the company determined it has “excess capacity in its manufacturing network due to the changing global demand resulting from the loss of patent exclusivity and the achievement of greater efficiencies in manufacturing processes.”

Consolidating work into fewer facilities is necessary as the company enhances its ability to compete even more effectively in a changing global pharmaceutical market.  Pfizer employs close to 2,700 people in Puerto Rico, with manufacturing facilities located in Barceloneta, Guayama and Vega Baja, and commercial offices located in San Juan.

The closing is expected to affect about 500 Pfizer employees in Barceloneta. Pfizer’s Vega Baja and Guayama operations will continue and some of the work currently done at Barceloneta will transfer to Vega Baja, but it remains unclear whether current Barceloneta workers will have the chance to relocate.

“It is premature at this time to determine the effect on employment as the company explores strategic options for Barceloneta,” company officials said.

“The decision to exit Barceloneta came after a comprehensive review of the company’s global manufacturing network as it exists today and what will be needed in the future to ensure Pfizer’s success in the years ahead,” said John Kelly, vice president, strategy and transitioning Sites.

“The reality is that Pfizer’s manufacturing network has more capacity than it needs and to remain competitive the company must match its manufacturing capacity with the future needs of the business,” he said. “In spite of this change, Puerto Rico remains an important location for Pfizer with major operations in Guayama and Vega Baja.”

“This was a difficult decision to make because we know the impact it will have on the talented and experienced Pfizer colleagues and on the Puerto Rican community, but it is one we need to take to ensure the company has a manufacturing network with the right capacity and the right capabilities to meet the changing nature of the medicines being developed by Pfizer researchers,” said Kelly.

Pfizer will explore opportunities to sell the site and is willing to work along with the Puerto Rico Industrial Development Company to market the property and find alternate uses. However, success depends on a number of market factors including demand for pharmaceutical manufacturing facilities, the company noted. 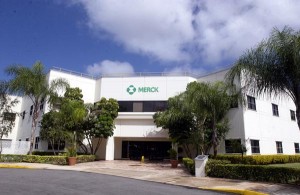 Merck also out
Pfizer is the second pharmaceutical company to announce its decision to close in Barceloneta. Last week, Merck will end production and close its Barceloneta plant next year.

Merck said it will focus on new product development and new product launches at its Las Piedras site, where it has invested more than $100 million over the past several years to boost its capabilities. Merck’s Las Piedras site is one of only two facilities its global network dedicated to the development and launch of new products. The site is currently bringing online new manufacturing technologies to support the launch of three new Merck products, the company said.

“During its 65 years in Puerto Rico, Merck has been committed to innovation and has demonstrated long-term value to all our stakeholders on the island. That commitment continues as we further develop Las Piedras as a strategic site to develop and bring new products to market and to patients around the world,” said Cesar Simich, Merck’s vice president and managing director for Puerto Rico and the Caribbean.

In addition, Merck confirmed that the formulation operations at its Arecibo facility will also be consolidated into Las Piedras and transferred to third-party contract manufacturers by the end of 2016.