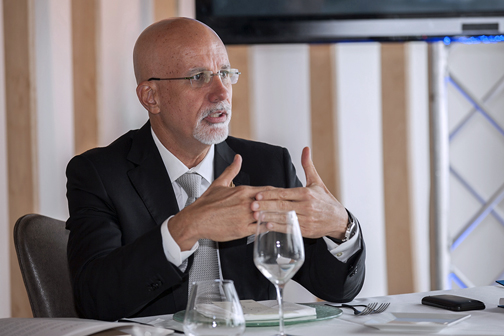 It’s no secret that Puerto Rico’s real estate sector has taken a beating in recent years due to the economic woes the island has been facing for the better part of the past decade. Property sales have stagnated and values have dropped in certain categories, affecting banks and brokers alike.

In a bid to offset the ongoing problems, Banco Popular presented Thursday a series of new services developed to support real estate agents, through the bank’s “Conexión Popular” platform.

By making their work easier and better, the bank is looking to partner with brokers to inject some life back into home sales, said Silvio López, chief executive officer of Popular Mortgage, during a meeting with members of the media.

“We recently transformed other programs, such as ‘Casa Fácil’ and other areas to become more efficient. As a result, our metrics over the past two mohths have shown a dramatic improvement in mortgage closings,” López said, noting that the bank has set out to close $1.1 billion in mortgage loans this year, down by $300 million when compared to 2013.

“It’s a conservative goal, a bit less than last year, but it’s still an aggressive goal. We knew that the island’s mortgage market would shrink this year. It’s a challenge, but we’ll be implementing a series of initiatives to reach that goal,” he noted.

By way of “Conexión Popular,” the bank will provide brokers with physical and virtual tools to better do their jobs. Included is office and meeting space at the Popular Altamira Center in Guaynabo, as well as online access to a variety of resources, including the Puerto Rico Property Registry, where they can find the latest documents submitted for the home they are selling, López said.

In the pipeline is opening a similar space for brokers in the southwestern region, he added.

Puerto Rico’s real estate sector has been sluggish partly due to consumer concerns over the island’s economic conditions, he said.

“However, I believe this is a great time for people to buy, but many hold back due to fear. We’ve seen the market stabilizing recently, and new property inventories have been reduced,” he said.

Consumers would be wise to take advantage of historically low interest rates — which are expected to start creeping up later this year — as well as government incentives before they expire, he said.

“The government’s ‘Hogar Propio’ program is running out of funds, with about $2 million left to disburse. Although the program has been extended, no funds have been assigned to it yet,” López said. “We’re working with the Housing Finance Authority to see if another program can be created because government incentives have helped minimize the impact of low-cost home sales.”

Popular’s plans for brokers also includes organizing “fam trips” to see existing properties available for sale, as well as conduct co-brokerage activities to move repossessed properties. López could not provide a number of repossessed homes it has in its portfolio.

“We’re creating the environment and tools so that brokers can learn about what’s out there and can work as teams to move property sales along,” he said.

Doral Mortgage partners with San Juan Board of Realtors