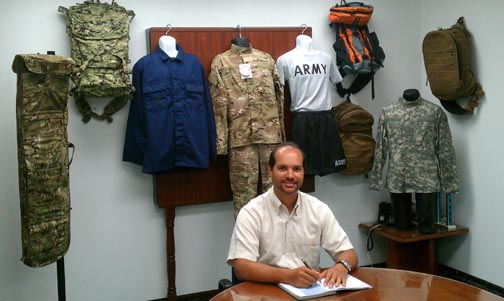 “We are honoring Oscar for his commitment to excellence in government contracting, for creating jobs and providing work incentives for his employees, and for manufacturing uniforms and tents for our men and women in the armed services, including the new universal uniforms our troops are now wearing in Afghanistan,” said SBA Administrator Karen G. Mills. “Oscar’s story is a true testimony of all that small businesses do for our nation and its economy.”

Quiles honed his skills in the military and occupational uniform manufacturing business during almost a decade working for his family’s business, Caribbean Needlepoint Inc.

In 2003, after gaining support from the Puerto Rico Industrial Development Company, Quiles bought a company that was about to close, keeping all 50 employees on the payroll. He also got support from the Workforce Investment Act Program and from the commonwealth’s Work and Nutritional Assistance Program to provide work incentives for the 50 employees.

A year later, the company became Pentaq Manufacturing, specializing in commercial military clothing, military uniforms and related products. At present, the company has 160 employees and $3.2 million in revenue.

Pentaq is certified in the SBA’s 8(a) Business Development Program and its clients include the Department of Defense and the U.S. Coast Guard. The DoD awarded a $3.2 million contract to manufacture uniforms and tents for U.S. troops, and the company later produced universal uniforms that U.S. forces are now wearing in Afghanistan.

Most recently, both entities awarded $17.7 million in contracts to Pentaq to manufacture coats, shirts, trousers, bed nets and bags.

The theme of this year’s MED Week event was “Emerging Industries & Markets: A Blueprint for Success,” and was co-hosted by the SBA and the U.S. Department of Commerce’s Minority Business Development Agency.