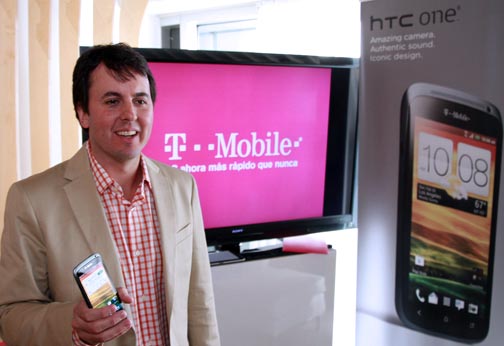 The merger between Deutsche Telekom, T-Mobile USA’s parent, and MetroPCS Communications Inc. may prove good for Puerto Rico consumers, who although will not be affected as directly as stateside customers, could be on the receiving end of positive benefits down the road, Jorge Martel, general manager of T-Mobile Puerto Rico, said Wednesday.

This is so because the combined company, which will retain the T-Mobile name, will have the expanded scale, spectrum and financial resources to aggressively compete with the other national U.S. wireless carriers and invest heavily in its operations, including Puerto Rico, he said.

“It’s estimated that the combined companies could generate $6 billion in economies of scale, which is money that can be reinvested in better services,” he said. “We’re also going to benefit from procurement synergies, which means that we’ll have greater access to more equipment and devices.”

Executives from Deutsche Telekom and MetroPCS jointly announced the terms of the deal that call for a recapitalization through which MetroPCS will declare a 1-for-2 reverse stock split, make a cash payment of $1.5 billion to its shareholders and acquire all of T-Mobile’s capital stock by issuing to Deutsche Telekom 74 percent of MetroPCS’ common stock on a pro forma basis.

If approved, the company will be a stronger competitor and will be well positioned to drive future growth, something Deutsche Telekom had sought to do through last year’s botched merger with AT&T.

Based on analyst consensus estimates for this year, the combined company is expected to have approximately 42.5 million subscribers, $24.8 billion of revenue, $6.3 billion of adjusted EBITDA, $4.2 billion of capital expenditures and $2.1 billion of free cash flow in 2012.

If approved during the first half of 2013, the deal will create a stronger value carrier in the U.S. wireless marketplace, as the companies combine their LTE-based networks and spectrum. The combined carrier has also vowed to offer a wider selection of “attractive, competitively priced plans” to better serve the marketplace, including contract, no-contract monthly, SIM-only, pay-as-you-go and mobile broadband services.

Upon consummation of the transaction, the combined company is expected to continue trading on the New York Stock Exchange, which opens the door to new financing opportunities previously unavailable to T-Mobile USA.

“This is great news that shows that T-Mobile USA is here to stay and dispels any doubt that Deutsche Telekom would not continue investing. It’s an aggressive move and solidifies the company,” Martel concluded.