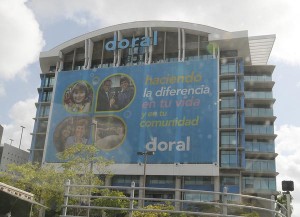 The Federal Deposit Insurance Corporation has warned Doral Bank that it may no longer include in its calculation of its Tier 1 Capital some or all of the tax receivables from the government, which represented $289 million of the bank’s approximately $679 million of Tier 1 Capital at Dec. 31, 2013.

Without the source of income, Doral Bank will no longer be in compliance with its capital requirements under its Consent Order with the FDIC, the Puerto Rican bank told the Securities and Exchange Commission in a filing Thursday.

As a result, Doral is developing a revised capital plan for regulatory approval, projecting it can continue to finance its operations at least through the remainder of 2014 without the use of additional brokered deposits as it currently has other sources of liquidity.

“For some time now, as we have indicated previously, we have been developing and evaluating alternative strategic initiatives to respond to significant trends affecting the company, including the adverse effects on our business from the continued economic problems in Puerto Rico as well as our success in building a US-based business,” said Glen Wakeman, CEO of Doral Financial Corporation.

“In response to the latest regulatory developments, we are now in the process of developing a revised capital plan, which may include a sale of certain performing and non-performing assets and businesses and a modification of our capital structure, in an effort to adequately meet the requirements of our regulators,” Wakeman said.

Pursuant to the Consent Order with the FDIC dated Aug. 8, 2012, Doral Bank is not permitted to accept, renew, or roll over any brokered deposits unless it has been granted a brokered deposit waiver by the regulator. In the event any capital ratio falls below the minimum required, Doral Bank must either increase capital in an amount sufficient to comply with the capital ratios as set forth in Doral Bank’s approved capital plan, or submit to the FDIC a contingency plan for the sale, merger, or liquidation of Doral Bank in the event the primary sources of capital are not available within 120 days.

Doral also expects that it may have to submit a new capital plan to the Federal Reserve Bank of New York, Doral’s primary regulatory authority, for approval, the bank told the SEC.

In conversations with the FDIC, the agency indicated that until such time as Doral Bank provides revised capital calculations that incorporate this, the agency would not consider granting Doral Bank waivers to accept brokered deposits.

At April 21, brokered deposits accounted for approximately 18 percent of the total funding of Doral’s operations, which on Thursday said has been working to reduce its reliance on this instrument.

Doral Bank believes that as part of its capital plan it must seek immediate financial support from equity and debt holders and/or external sources.

Unless Doral can effectuate a capital plan (which would include a recapitalization and restructuring of the operations) that complies with regulatory requirements, its financial condition and results of operations “will be materially and adversely affected, it may not be able to effectuate the recapitalization and restructuring plans that it believes are necessary to comply with regulatory requirements, it may not be able to obtain on an ongoing basis an unqualified opinion of it’s independent auditors, and  regulators may take additional regulatory action against Doral,” it told the SEC.

“We are working diligently to resolve these issues and reach an agreement with our regulators that will allow us to move forward in an orderly way,” Wakeman said. “In the meantime, and importantly, we believe Doral has adequate liquidity to finance its operations as we work through this process. Doral, our Board of Directors and the entire management team remain fully committed to serving our valued customers.”

Doral noted that its customer deposits are FDIC-insured to the fullest extent of the law for up to $250,000 per depositor.

Subsequent to entering into the 2012 agreement, Doral included Puerto Rico government tax receivables as Tier 1 capital without objection by the FDIC and the FRBNY, until this recent determination by the FDIC and Office of the Commissioner of Financial Institutions.

“Doral continues to believe Puerto Rico Government tax receivables may properly be included in Doral Bank’s Tier 1 capital. Doral will be meeting with its regulators to address and to seek to mutually resolve the outstanding issues while preserving its appeal rights as appropriate,” the bank told the SEC.

Doubts over refund
On April 15, Doral received a letter from the Treasury Department asking the bank to provide information to prove that it made actual tax payments to the agency that are the subject of the 2012 Closing Agreement pursuant to which the local government agreed to pay back to Doral its tax over-payments.

In addition to the request for information, Treasury said it did not understand the basis upon which Doral would be due a tax refund of more than $229.8 million because the refund was due to “accounting” losses versus actual tax payments.

On April 23, Doral responded to the letter and provided copies of tax payments made of approximately $155.6 million, which together with interest entitled, the under Puerto Rico tax law as of the 2012 Closing Agreement to a refund of $232 million, it said.

Doral also explained in its response how Treasury used the accounting basis of the deferred tax asset held by Doral as recorded in its financial statements to negotiate a lower refund payment than the tax refund that was actually due pursuant to Puerto Rico tax law.

In addition, Doral notified the Treasury Department that the 2012 Closing Agreement expressly provided that it would constitute a violation of the agreement if the agency sought to reopen negotiations concerning the tax refund due to Doral.