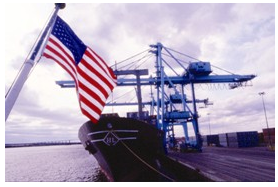 North Carolina-based shipping and transportation logistics provider Horizon Lines Inc. on Thursday confirmed it has reached an agreement with the U.S. Department of Justice to enter a guilty plea and settle a charge of violating federal antitrust laws with respect to Puerto Rico trade activity.

As a result, the company will pay a $45 million fine over five years. The plea agreement is still subject to court approval. Horizon has agreed to enter a guilty plea for violating the Sherman Act between May 2002 and April 2008. The fine will be paid in increments through 2016.
“We are very pleased to have reached a resolution with the Department of Justice,” said Michael T. Avara, senior vice president and CFO.  “We now look forward to moving ahead in our discussions with lenders.  We remain very focused on serving our customers well, further improving our operational excellence, and financially strengthening our company for the benefit of all of our stakeholders.”
The plea agreement provides that Horizon Lines will not face additional charges relating to the Puerto Rico trade route, nor will it face charges in connection with a separate DOJ investigation into the Alaska trade route.
Furthermore, the DOJ agreed to not press new charges against any Horizon Lines directors or officers previously or currently employed by the company. In 2008, three former Horizon Lines executives and two former executives of Sea Star Line were sent to jail over the price-fixing scheme.

On April 18, 2008 the DOJ executed search warrants and/or subpoenas as part of an ongoing criminal investigation that involved Horizon Lines Inc., Horizon Lines LLC, Sea Star Line LLC, Crowley Maritime Corporation and Crowley Liner Services Inc. into allegations of possible antitrust violations and price fixing in the Puerto Rico trade. Horizon Lines and Crowley were said to be cooperating from the start of the probe.

“We have taken major steps to put the issues in the Puerto Rico trade lane behind us and are working diligently to resolve the civil litigation arising out of the DOJ investigation as it relates to Puerto Rico,” Avara said.  “These steps include reaching a settlement with the plaintiffs in the direct purchaser Puerto Rico class-action antitrust cases.  As part of this process, Walmart recently released us from antitrust claims related to the Puerto Rico trade lane.”
On Tuesday, Horizon Lines entered into a memorandum of understanding with the government to pay $1.8 million to settle claims by indirect buyers who claimed Horizon inflated prices for goods imported to Puerto Rico as a result of the alleged price fixing conspiracy.
Author Details