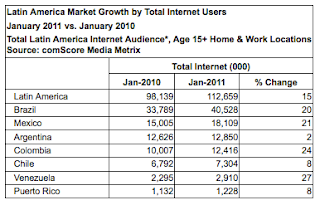 The number of people age 15 and older accessing the Internet in Puerto Rico grew about 8 percent year-over-year to about 1.2 million, according to the results of a study conducted by comScore Inc., a leader in measuring the digital world.

Despite the modest growth result for the island, the positive performance evidences a growing reliance on the Internet, both for educational and social purposes. This, in turn, represents opportunities for business sectors such as advertisers and publishers throughout the region, comScore said.
Puerto Rico’s Internet users spent an average of 18 hours online per month, visited 1,410 pages of content and recorded 41.4 monthly visits.
The island’s results were about half of the overall growth reflected in the Latin American region as a whole, which jumped by 15 percent in the past year to 112 million people who accessed the Internet from a home or work location. The figure excludes visits from public computers, such as Internet cafes, or access from mobile phones or PDAs.
“During the past year, Latin America has experienced strong growth in Internet usage throughout the region,” said Alejandro Fosk, comScore senior vice president of Latin America. “Consumers are turning to the Internet for a variety of activities including communication, social connection, information and commerce, as the web becomes an increasingly valuable resource for consumers and marketers alike.”
The full results of the study, which compared Internet participation rates from January 2010 to January 2011, will be presented — along with other key online trends — via a live webinar entitled “2010 Digital Year in Review Latin America” on Tuesday.
“With continued growth expected across the region, advertisers and publishers are just beginning to realize the tremendous potential that exists for this channel throughout Latin America,” Fosk said.
Puerto Rico’s performance was among the lowest of the individual countries included in the study, tying only with Chile — which had 7.3 million Internet users — for sixth place. Venezuela and Colombia experienced the highest growths, with 27 percent and 24 percent increases and 2.9 million and 12.4 million Internet users, respectively.
Brazil, with 40.5 million users, reflected a 20 percent growth from the 33.7 million it had as of January 2010. Mexico followed with a 21 percent year-over-year growth, recording 18.1 million users in January 2011, versus 15 million in the same month in 2010.
“Looking across individual markets, Brazilians were the most engaged users averaging the most time spent online (25.8 hours), the most pages of content (2,077 pages) and the most monthly visits (55.5 visits),” the study showed.
The information and documents contained in “News is my Business” are property of this blog. You may not copy, distribute or use this information without the express written permission of this blog’s creator, unless it is for personal or educational purposes. Fees for commercial or for-profit use apply.
Author Details