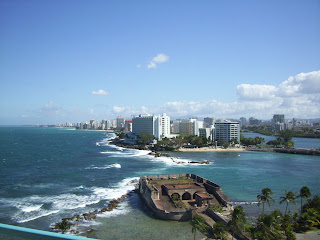 Puerto Rico is among the world’s 50 most competitive travel and tourism destinations, as ranked by the World Economic Forum’s Centre for Global Competitiveness and Performance.

In the report released Monday, Puerto Rico grabbed the 45th position among 139 global destinations, moving up eight notches since the study was last released in 2009. The island received a score of 4.42 out of six points granted to travel and tourism performance measured in the fourth edition of the study first conducted in 2007.
However, when broken down by regions, Puerto Rico grabbed the sixth spot as the top performer in the Americas, getting high marks for its regulatory framework, business environment and transportation infrastructure, and its human, cultural and natural resources — all key pillars of the WEF’s study.
“It is extremely encouraging to see Puerto Rico’s upward trend in this report,” said Irene Mia, director of the Centre for Global Competitiveness and Performance.
The trade organization based in Switzerland noted that Puerto Rico’s other strengths in tourism are associated with its “solid efforts to ensure environmental sustainability” for which it ranked 14th in the region. The island also received kudos for improving its pricing competitiveness, although it did not provide details on which it based its assessment.
“This helps to show the island’s tourism sector and the people of Puerto Rico that we’re on the right path to developing local tourism,” Puerto Rico Tourism Co. Executive Director Mario González said. “It is precisely the areas addressed in the PRTC’s strategic plan that showed the most significant improvement and on which we’ve managed to capitalize on the island’s advantages as a destination.”
However, the report suggested that Puerto Rico could strengthen its position as a global travel and tourism player by upgrading its Internet, telephone lines, and broadband infrastructure, for which it received a 63rd ranking in the region.
“Other areas of concern include safety and security in the territory (61st) and health and hygiene issues (69th),” the report showed.
The results were announced via webcast with the Economic Development and Commerce Department, when agency chief José Pérez-Riera noted that the data “shows how a government’s on its tourism agendas drives the sector’s development.”
The World Travel & Tourism Council estimates that the travel and tourism sector accounts for 9.2 percent of the global gross domestic product, 4.8 percent of world exports, and 9.2 percent of world investment, returning to the position it held before the crisis originated five years ago.
Author Details