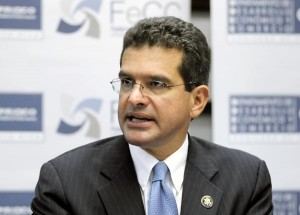 A bi-partisan Congressional bill proposing sweeping changes of the America Invents Act, which regulates patents, was passed by the House Friday with amendments submitted by Resident Commissioner in Washington, Pedro Pierluisi to benefit Puerto Rico.

To ensure that the island is fully included in the bill’s reforms, Pierluisi offered an amendment during the Judiciary Committee’s consideration of the bill that would clarify that Puerto Rico is a “state” in a provision of the bill concerning jurisdiction of patent lawsuits.  This amendment will ensure that patent lawsuits commenced in the territories are heard in federal court, providing uniformity between the territories and the states.

“This bill will spur innovation and investment in new technologies and will create thousands of well-paying jobs for American workers, particularly in the pharmaceutical and biotechnology sectors that call Puerto Rico home,” said Pierluisi, who voted in favor of the bill when the House Judiciary Committee reviewed it in April.

Among other things, the measure will, for the first time, create a mechanism to provide the U.S. Patent and Trademark Office with full access to the fees paid by inventors. That contrasts to past procedures through which Congress diverted fees the USPTO collected to fund other programs.  The bill creates a new USPTO Reserve Fund to provide the agency with the funding it needs to address the large backlog of patent applications, including an undetermined number of submissions from Puerto Rico.

The USPTO is an agency of the U.S. Department of Commerce in charge of granting and registering patents and trademarks.

“We are encouraged by the statements of so many members of Congress calling for the USPTO to have full access to all of its fee collections.  Full funding of the USPTO is necessary for the USPTO to successfully implement this legislation and to more effectively perform its core mission,” Kappos said. “We are hopeful that this critical legislation can move expeditiously toward final passage and enactment.”

The bill now moves on to the U.S. Senate for a vote.

Bill shifts patent rights
In addition, the bill brings the United States in line with the world standard of issuing patents to the inventor who is the first to file.  Currently, the first person to invent the invention receives the patent, which can lead to expensive and wasteful proceedings before the USPTO when multiple persons claim to be the “true” owner of the invention.

“Studies have shown that these proceedings hurt small inventors, who have fewer resources to spend participating in such proceedings,” Pierluisi said.

The bills significant amendments also seek to strengthen patent rights, something Pierluisi said is “the key to innovation,” by creating supplemental examination period after the patent is issued during which a patent owner can submit new information about the patent to the USPTO’s attention and seek reevaluation of their patents.

The bill also streamlines challenges to patents by creating a new post-grant opposition that allows a person to challenge the validity of a patent immediately after it is issued, based on any ground of patentability.