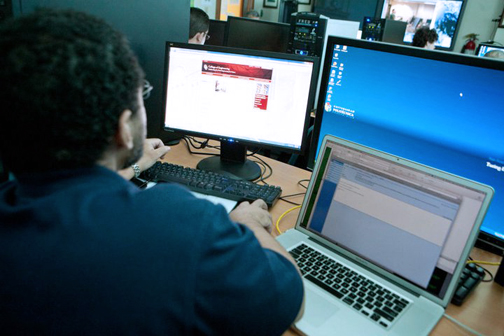 The Hato Rey college is adding on to its computing studies. The Hato Rey college is adding on to its computing studies.

Keeping up with the latest trends in computer science and information technology, the Polytechnic University of Puerto Rico in Hato Rey is poised to become the first college on the island to offer a graduate computer science course in cloud computing, starting next semester.

Starting in August 2012, the PUPR Graduate School will offer the “Cloud Computing Security and Privacy” course as part of the Computer Science and Computer Engineering masters programs.

“In the last few years one of the most important trends in information technology has been the rapid rise of cloud computing,” said Jeffrey L. Duffany, adjunct professor of the Electrical and Computer Engineering and Computer Science Department at the PUPR School of Engineering and Geomatic Sciences. “The idea behind cloud computing is that users have all of their data and software stored somewhere on the Internet, so they can access it wherever they are, be it at work, at home or while traveling.”

According to news website Mashable, portability is only one of the many benefits of cloud computing. While 33 percent of companies surveyed worldwide listed access to information from any device as their top driver to adopt cloud computing, 82 percent of all companies reported to have saved money on their last cloud adoption project. Improvements in information technology performance has also been a cloud adoption driver, with 80 percent of companies surveyed reporting improvements within six months of moving to the cloud.

“At Polytechnic University of Puerto Rico, we are very proud of our administration, faculty and researchers’ continued efforts to keep ahead of the curve in matters of information technology, information security and assurance and computer science,” said Alfredo Cruz, coordinator of the PUPR graduate program in Computer Science, Computer Engineering and Computer Information Systems.

“We are confident this new offering will create more skilled computer security professionals, who will be capable of reducing vulnerabilities in computing systems in various industries such as finance, pharmaceuticals and customer service, where there are vast amounts of data to be analyzed and leveraged for new business ideas,” Cruz said.

Important milestone
This new “Cloud Computing Security and Privacy” course is the latest initiative to strengthen the PUPR’s information security curriculum. The Hato Rey college is the only local academic institution to be appointed by the National Security Agency and the Department of Homeland Security as a National Center of Academic Excellence in Education of Information Security. Such designation has only been bestowed to 100 institutions nationwide in recognition of the quality of security in information education.

The Electrical & Computer Engineering and Computer Science Department at the PUPR School of Engineering and Geomatic Sciences has also led the way in the computer forensics field with the only computer forensics laboratory of its kind in Puerto Rico, equipped with FRED Super Computers powered by NVIDIA Compute Unified Device Architecture processors, as well as one of the largest cluster computer laboratories in Puerto Rico with 256 processors.

For the third year in a row, PUPR will also co-host InfoSecurity San Juan, an international conference series discussing information security issues in Latin America. The seventh annual edition of this event will take place at Puerto Rico Convention Center on March 20.

Practical Techie: The move to the ‘greening’ of the electronic cloud
Rafael Matos February 9, 2021

Practical Techie: The move to the ‘greening’ of the electronic cloud