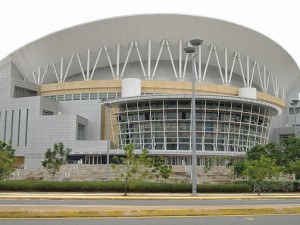 As it approaches its 13th anniversary celebration, the Coliseo de Puerto Rico announced it remains the top ranked venue in the Caribbean, according to Pollstar Magazine.

The venue used for concerts, family shows, sport events, among others, has been ranked among the “Top 35 arenas in the World” since its opening in 2004. The “Choliseo,” as it is popularly known, can be configured in at least six different layouts with capacities ranging from 2,400 to 18,500 spectators, operators said.

Pollstar Magazine also confirmed that the Coliseo de Puerto Rico is ranked 31st worldwide on the mid-year top 200 arenas, 12th in the continental U.S. and 2nd in the Latin American market.

“We are always looking for giving not only a good experience but a memory of a lifetime,” said Eduardo Cajina, General Manager.

“Our team works hard in creating world-class experiences for concerts and events.  Being continuously ranked among the Top 30 venues after almost 13 years is the best reward we can receive since it gives us the energy to continue the hard work to put Puerto Rico’s name as a world-class entertainment place,” he said.

During the first half of 2017, the Choliseo has hosted artists such as Tommy Torres, Maná, Justin Bieber, Miguel Bose, Disney on Ice, Sting, Ednita Nazario, Ed Sheeran, WWE, One Republic, among many others.

Before the end of the year, the Caribbean’s largest venue will host family events: Monster Jam and Harlem Globetrotters. The arena will also be used for a number of concerts by artists Carlos Vives, Jarabe de Palo, Draco Rosa, Ricardo Arjona, Tommy Torres and Juanes.

Coliseo de Puerto Rico in line for $6.2M upgrade ahead of 15th anniversary