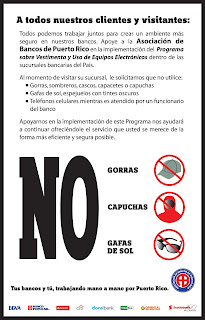 Attention Puerto Rico bank customers: Starting Feb. 14 individuals will not be allowed to wear sunglasses or hats while conducting a transaction at a local bank branch. Mobile telephone use will also be limited.

These new conditions are part of a newly established set of regulations regarding attire and use of electronic devices at local banks, implemented jointly by the Puerto Rico Bankers Association and the Puerto Rico Police Department. The program seeks to cut down on banking-related criminal acts, such as robberies, identity and financial information theft, and make it easier to identify criminals captured on video by security cameras.

In the last two years, there have been 90 reported bank robberies on the island, 49 of which were carried out in 2009, 39 in 2010 and two so far this year. Although the number of incidents has dropped — and all of last year’s crimes were solved — it is expected that the new regulation will help improve the statistic further.

The program has been instituted in Florida, Illinois, Wisconsin, and Michigan, where the number of bank heists reportedly dropped by 70 percent in the first 90 days after its implementation, the Bankers Association said Tuesday.

Although it is not mandatory for people to shed their accessories, “they will be pulled aside by a banking official who will give them personalized attention,” said Carrión, rejecting the notion that the measure could be considered discriminatory in the case of those people who do not wish to take off their hats or sunglasses due to some sort of medical or other reason.

“We’re going to emphasize on trying to downplay the opportunity that a perpetrator may have to threaten the safety of the rest of the bank’s clientele. We’re conscious people who don’t want to harm those people with a [health] condition,” he noted.

The use of celphones will be limited because would-be robbers “use them to communicate with people they have outside ready to help perpetrate the robbery,” Carríon added.

The Puerto Rico Bankers Association is a nonprofit trade organization that groups the majority of the island’s leading banks.