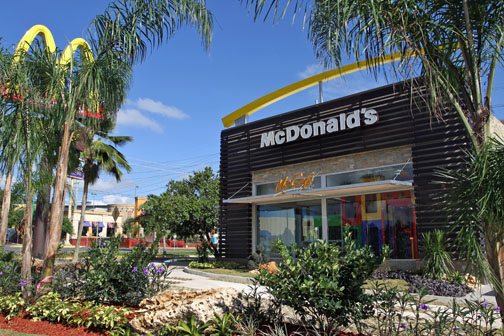 This commitment by Arcos Dorados reflects a similar commitment by McDonald´s Corporation in the U.S. and Canada to exclusively source cage-free eggs by the year 2025. Puerto Rican McDonald’s operators have joined a petition by the Service Employees International Union submitted to the Federal Trade Commission Monday to launch an investigation into the franchise sector and issue recommendations for curbing ”abusive and predatory” practices by franchisors in the $800 billion industry.

José Quijano, a former vice president at McDonald’s Corp. and current McDonald’s franchisee from Puerto Rico, spoke on behalf of all Puerto Rican McDonald’s operators about how McDonald’s franchisees on the island collectively lost control of their businesses overnight in 2007 after the company unilaterally installed the South American investment firm Arcos Dorados as the region’s new franchisor, empowered to make its own rules in place of McDonald’s while also actively competing as a franchise operator itself by adding new stores in the market.

“We enjoyed a good relationship with McDonald’s until we developed the Puerto Rican market and it became very profitable,” said Luis Moyett, a McDonald’s franchisee who opened his first store in Puerto Rico in 1981.

“McDonald’s then broke off its contact with us, and inserted a foreign sub-franchisor that makes its own rules. That company degraded services, abandoned the advertising cooperative, stopped paying to the joint advertising fund, opened its own restaurants close to ours and took our customers away,” he said.

“McDonald’s decided to make a financial experiment in Puerto Rico at our expense. We don’t know whether we are a pilot plan for things to come in the U.S. mainland, but this experiment is destroying our livelihoods,” Moyett added.

The SEIU’s 32-page petition calls on the FTC to invoke its authority to issue civil investigative demands that would compel top franchise companies to turn over information about their relationships with franchisees.

The request for investigation contains evidence from a review of franchise agreements at 14 of the largest franchise systems in the country finding that franchise agreements are consistently one-sided, often allowing franchisors to terminate franchisees for minor violations of one of thousands of pages of ever-changing rules, the SEIU said.