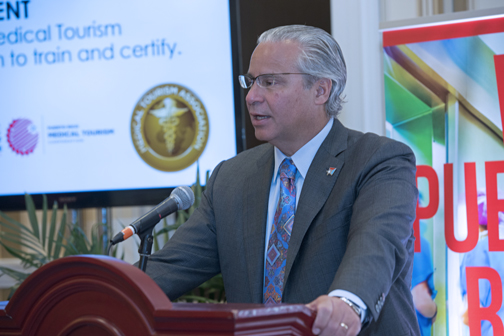 Economic Development and Commerce Secretary Alberto Bacó will take on an additional role in Gov. Alejandro García-Padilla’s cabinet effective today, when he starts as acting President of the Government Development Bank.

The Board of Directors of the GDB approved the appointment unanimously on Sunday afternoon.

Bacó’s incursion into the GDB is not new, given that part of his role at Economic Development has called for sitting on the GDB’s board since 2013. Furthermore, from 1989 to 1990 Bacó served as executive vice president of the GDB in charge of the areas of public and private financing. He also headed the Puerto Rico Economic Development Bank between 1990 and 1992.

He succeeds Melba Acosta, who announced she would be stepping down as GDB president in early July.

During his stint at the GDB — which is expected to last about five months through the end of the year — Bacó has vowed to set forth a work plan that will allow the institution to recover deposits and pending debts.

The Fiscal Control Board is created by the Puerto Rico Oversight, Management and Economic Stability Act (PROMESA), and its members are expected to be named and in place by Sept. 15.

“I have consistently argued that the GDB had focused its efforts on addressing fiscal issues and that the vision of economic development within the institution had been relegated to the background,” Bacó said.

“I see here an opportunity to refocus and restructure the GDB’s priorities to make it a more effective tool to generate economic activity and growth,” he added.

The GDB has been operating under a “state of emergency” since April, when García-Padilla ordered a moratorium to protect the bank’s dwindling liquidity. On July 1, the GDB defaulted on some $400 million due in debt service payments due to creditors.

Bacó: GDB should not be liquidated, must be re-focused
Michelle Kantrow-Vázquez August 2, 2016

Bacó: GDB should not be liquidated, must be re-focused