Guaynabo Mayor Héctor O'Neill speaks during a recent event to announce the results of the recycling effort. 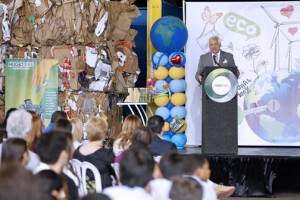 Guaynabo Mayor Héctor O’Neill speaks during a recent event to announce the results of the recycling effort.

Nine Guaynabo schools recovered 110 tons of recyclable materials as part of the “Earth Recycling Challenge,” a contest organized by Hugo Neu Environmental in partnership with the town of Guaynabo and the Environmental Awareness Foundation.

“This contest was an educational vehicle to generate enthusiasm for recycling not only in participating schools but also in the homes and communities of these students,” said Greg Cortés, head of Hugo Neu in Puerto Rico. “We were struck by the many strategies the schools used to encourage recycling in the community.”

The contest began with a number of educational workshops offered by Hugo Neu Environmental in participating schools, highlighting the benefits of recycling and the importance of cleaning and segregating the material.

At some schools, students who completed recycling quotas received credit in the community hours that they serve, while other schools treated recycling as a special project and graded the students, and still others created campaigns for the school and in social media.

“All participating schools had high levels of engagement and they were able to showcase a number of effective strategies to recycle,” said Cortés.

Hugo Neu Environmental has been operating the Guaynabo Municipality’s Recycling Plant since February of 2014. It processes 500 tons of recyclable materials each month.

During a ceremony held last week, Guaynabo Mayor Héctor O’Neill García, acknowledged the effort made by participating schools to generate public awareness on the importance of making the most of materials that are used to benefit the environment instead of discarding them.

“We congratulate the organizers of the Earth Recycling Challenge, which motivated these students to recycle 110 tons of materials. Certainly, they are all winners in this historic gesture to protect our planet,” said O’Neill of the joint efforts by Hugo Neu Environmental, the Environmental Awareness Foundation and Guaynabo’s Recycling Program, which began in 2003 with a door-to-door public awareness campaign.

Recycled materials
The 110 tons of recycled material are the equivalent of 220,140 pounds that were not sent to a landfill. Diverting recyclable materials from landfills is pressing in Puerto Rico, since several of the 27 landfills in operation have received orders to close.

The amount recycled, taking into account a population of 6,000 participating students, is the equivalent of 36.69 pounds per person.

Puerto Rico generates on a daily basis 10,000 tons of waste of which less than 15 percent is recycled.

“In addition to environmental benefits, recycling represents a great economic opportunity for Puerto Rico since it creates green jobs and generates value as we recover valuable resources from our waste stream,” said Cortés.