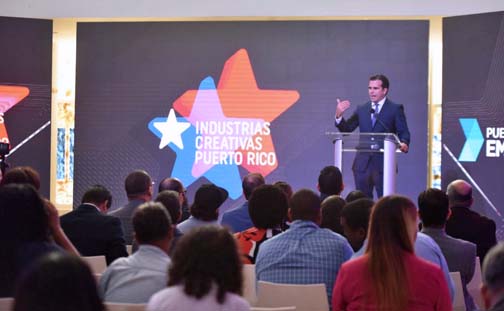 Looking to spur the growth and creation of creative industries, and small and medium businesses with export potential, Gov. Ricardo Rosselló on Wednesday announced the opening of the “Creative Matchmaking” call.

The initiative seeks to “promote opportunities for the development of local companies that can compete globally. The island’s creative industries have the potential to be world-class and ‘Puerto Rico Emprende’ is the ideal platform to promote them,”said Rosselló during the “Puerto Rico Emprende con las Industrias Creativas” symposium.

Through the “Puerto Rico Emprende” incentive program, the government is looking to benefit 30 companies — 15 creative industries and 15 small and medium businesses with export and development potential — which will be selected through a competitive process and approved by an internal evaluation committee.

The finalists chosen by the internal committee will present their proposals in July before a committee of experts to be appointed by the Executive Director of Puerto Rico Trade and Export, Ricardo Llerandi, in coming weeks.

Companies will present their services to small and medium businesses with high export potential and that have a need or deficiency in creative services. Puerto Rico Trade and Export will pay or match the cost of the services up to $5,000.

“This new vision aimed at encouraging the creative industries sector seeks to significantly maximize its potential as a major source of job creation in Puerto Rico,” Llerandi said.

“This model is called the triangle of added-value, as Puerto Rico Trade fulfills its responsibility to promote and develop these sectors, creative businesses will increase their labor portfolio and creative small and medium businesses will address their shortcomings,” Llerandi said.

By virtue of the Law to Promote Puerto Rico’s Creative Industries, Puerto Rico Trade is responsible for developing and delivering education programs, training, investment and financing to this sector (creative companies and creative groups.) Creative industries are the subject of a growing recognition worldwide for its huge potential as drivers of economic and social development.

The forum included the participation of local and international speakers who covered topics on the development of innovative creative industries in Latin America and the importance of developing this sector in Puerto Rico.

Adriana Padilla, director of Creative and Cultural Industries Chamber of Commerce of Bogotá, Colombia, gave a presentation on how the city began a plan to incorporate the creative industries in different sectors of the economy and the positive result.

Meanwhile, the co-founder of Creative Economy Initiative, Dyanis de Jesús, presented the theme of creativity and innovation models that have been used in European cities that are at the forefront in the promotion and inclusion of the creative industries as part essential for economic development.

In addition, during the event the Executive Director of the Institute of Puerto Rican Culture, Carlos Ruiz-Cortés, discussed the recently signed interagency agreement with Puerto Rico Trade to promote creative industries related to the island’s arts sector.

The agreement states that these businesses will be promoted and developed, specifically industries with potential for creating jobs and wealth through exports in the fields of arts, design and fashion, digital media and services such as architecture and education.