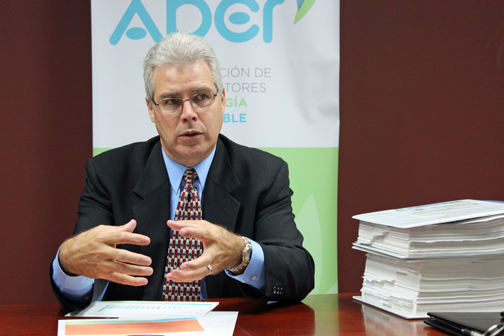 Despite the existence of several adverse factors that affect the price of renewable energy production in Puerto Rico, the amount per kilowatt-hour is considerably lower today than what it costs the Puerto Rico Electric Power Authority to produce energy from fossil sources, the head of the Association of Renewable Energy Producers said Wednesday.

Julián Herencia, executive director of the trade group known as APER for its initials in Spanish, explained PREPA has current production costs of about 20 cents per Kw/h, while energy from photovoltaic panels costs 15 cents, and what windmills produce costs 12.5 cents.

“If we add 12 percent of renewable energy to PREPA’s total output component, as required by Law 82, the pockets of all consumers would receive a relief of more than $200 million,” he said.

He also said that the price per kw/h of renewable energy systems already operating in the island or that are awaiting the government’s approval, “compare favorably with other jurisdictions in the United States and even other countries, such as Dominican Republic, Hawaii, Guam, or the U.S. Virgin Islands, for example.”

“Another element that you need to take into consideration is that in many states where the cost of production is lower than in Puerto Rico, state or local government provides subsidies or additional economic incentives for this activity, resulting in a more attractive cost,” Herencia said during a news conference Wednesday morning.

If the price of fossil fuels versus renewable energy sources were looked at prospectively, “ the difference is huge,” he said.

“It’s a fact that oil prices are extremely volatile and, according to the indicators provided by the U.S. Department of Energy, they will continue climbing. On the other hand, the price of renewable energy is completely predictable,” Herencia noted.

The expert warned that consumers are owed “correct and precise” information regarding renewable energy, especially when it comes to costs and output capacity.

“Unlike other sources of information that have tried to discourage the development of renewable energy projects in Puerto Rico, we believe it is important to clarify that if we do not step forward in this direction we risk losing the opportunity to lower energy prices to all Puerto Ricans, improve quality of life and health with a better environment, and lose an investment of $5 billion strictly from the private sector and more than 18,000 jobs in 56 projects already under contract with PREPA and at the end of the day you are creating a new industry on the island that can only be positive in all respects,” Herencia said.

Meanwhile, he said it is “completely normal for renewable energy systems to produce between 20 percent and 30 percent of their capacity,” as a local newspaper reported was the output of the Pattern Wind Energy farm in Santa Isabel.

“The climatic conditions prevailing in the island place solar irradiation and wind intensity on intermediate-to-low range measurement levels for these types of systems, compared to other locations, such as Texas or Arizona, where many of these projects are installed in deserts,” he said, noting that even in those places, production levels do not exceed 40 percent to 50 percent capacity.

The massive windmills comprising the Santa Isabel system have not been spinning in recent days, due to maintenance, Pattern Energy executives said. They confirmed the wind generators would start up again soon.