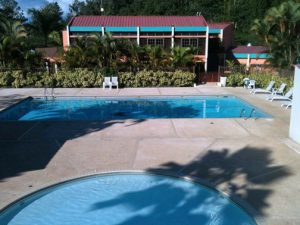 “This Saturday, Sunday and Monday, we were filled to capacity in most of the hostels belonging to the Association of Paradores Owners and the Puerto Rico Tourism Co.,” said Jesús Ramos, Association president, owner and operator of Parador Villas Sotomayor in Adjuntas.

“The pace of calls and reservations accelerated from Thursday to Sunday, causing Boquemar, El Buen Café and Combate Beach Resort to reach 100 percent capacity, and the Parador Villas Sotomayor, in the mountains of Adjuntas, reached 95 percent occupancy,” added Ramos.

“This weekend was different from previous years. We had three elements that caused a change in the reservations pattern: the forecast of rain during the weekend, the ambivalence about the celebration of the Constitution and Barbosa holidays, and an increase in misleading advertising about illegal hotels, which has caused our people to be more careful when booking,” said Xavier A. Ramírez, head of the Association’s marketing committee, and general manager of the Combate Beach Resort in Cabo Rojo.

Ramírez, however, said he was pleased with the support for the “paradores,” or small inns.

“We continue to see strong interest in quality, safety and service that our tourism product represents, and that’s most important. In the area of Porta del Sol, if we had more rooms, they would have been sold,” he said, referring to the island’s western tourism region.

For Héctor Martínez, owner of Parador El Buen Café in Hatillo, a new magnet toward the Porta Atlantico region — comprising towns along the northern coast —is the Christopher Columbus statue in Arecibo.

“Our beaches, adjacent to the statue that stands at about 110 meters tall, attracts many people to El Buen Café, causing an increase in our business and customer flow at our restaurant. Certainly, this summer is shaping up a little better than the previous one,” said Martínez.

“We expect to complete a good summer season. There are three weeks left before school starts and there is much interest in the attractions in Cabo Rojo. The call rate is brisk, and we still have rooms available,” said Cucho Rodríguez, of Parador Boquemar, in the area of Boquerón.