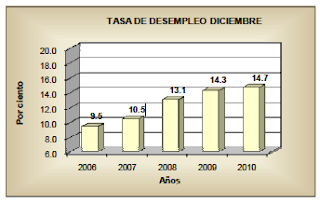 Puerto Rico’s out-of-work force averaged 16.1 percent during calendar year 2010, representing the highest rate since 1993, when the average was 17 percent, the Department of Labor and Human Resources informed Friday.

Last year’s totals reflect an increase of 1.1 percent over the 15 percent average reported for 2009, the agency said.
In December, the unemployment rate reached 14.7 percent, which represented a slight decrease of 0.7 percentage points when compared to the prior month. There were approximately 187,000 people jobless, or 13,000 less than the 200,000 out-of-work people reported in November 2010.
When compared year-over-year, last month’s totals were 0.4 percentage points higher than the 14.3 percent unemployment rate reported for December 2009.
The average number of unemployed people in 2010 was 209,000, an increase of 10,000 when compared to the 199,000 jobless in 2009.

Slightly more than 1 million people held on to a job last year, down from the 1.1 million who were working in 2009. In other words, the island’s workforce was around 35 percent in 2010, the Labor Department figures show.

Unsurprisingly, the report shows a slight increase in the number of self-employed people that make up the island’s workforce. In December, there were approximately 170,000 people working on their own, up 3,000 when compared to the prior month. However, a year-over-year comparison shows that the latest statistic reflects a drop of 3,000 in the self-employed category.
Author Details