The Camuy Cave Park and Crash Boat Beach among the attractions being revived. 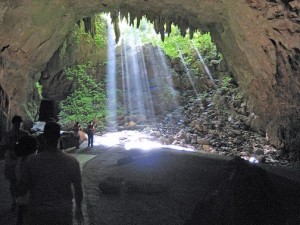 The Camuy Caves would be part of the attractions included in the Porta Atlántico tourism region.

Members of the Puerto Rico Chamber of Commerce told members of the Legislature Tuesday that it is “imperative that the government maintain an active and coherent public policy” when it comes to the tourism sector, which they believe is a “pillar” of economic development for the island.

At present, the sector contributes more than $4.3 billion to the economy and generates some 53,000 jobs, according to Tourism Company figures.

The trade group also told lawmakers that it is vital that any public policy in the making should direct all governmental entities to recognize tourism as a vital instrument capable of generating higher socio-economic growth and promoting the welfare of Puerto Ricans.

The suggestions came up during a public hearing for Senate Bills 1258 and 1257, both penned by Sen. Antonio Fas-Alzamora. The first proposes the creation of the Puerto Rico Tourism Regionalization Act, while the second measure amends the Porta del Sol Act, to clarify certain marketing issues for the brand name and the Porta del Sol tourist region.

“One of the strategies we have developed is regionalization. This effort seeks to create clusters of municipalities organized in tourist regions, to convert them into regional destinations within Puerto Rico,” said Tourism Company Executive Director Ingrid Rivera-Rocafort in written testimony.

She also noted that the agency she heads needs to have enough flexibility to create additional offices or merge existing ones depending on the needs of the regions created and taking into consideration their fiscal realities. She also said obligating the Tourism Company to include specific budgets to market, support and promote each region would negatively affect the quantity and quality of advertising the agency could buy annually.

Camuy to get its 1st municipal hotel
Michelle Kantrow-Vázquez October 31, 2012

Camuy to get its 1st municipal hotel