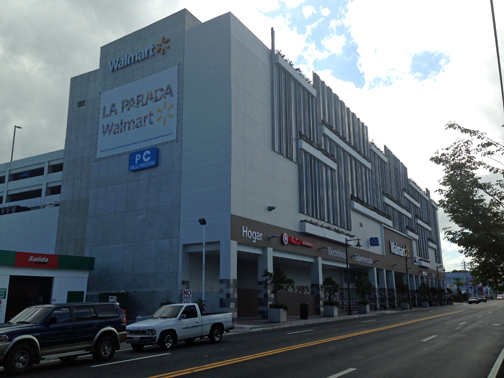 Walmart SuperCenter in Santurce is a six-story, 145,000-square-foot building. Walmart SuperCenter in Santurce is a six-story, 145,000-square-foot building.

As it readies to inaugurate its new signature store at Stop 18, Walmart is forging ahead with its plan to restructure its Puerto Rico store base by converting Walmart stores into supercenters. Another priority is buying more local products.

“We currently buy in excess of $80 million in products made (or grown) in Puerto Rico. This does not include purchases to local distributors,” said Ivan Báez, director of corporate affairs. “Walmart is always looking at new suppliers and we want to grow purchases of products made in Puerto Rico and agricultural goods.”

The new Walmart SuperCenter Santurce, scheduled to open on Feb. 27, is the company’s first multi-storied store in Puerto Rico. The 145,000-square-foot building is six stories high: the first two floors are devoted to retail, the other four accommodate customer parking.

Meanwhile, more supercenters are on their way as part of a Walmart plan to convert its regular stores, also known as Division 1 stores, into supercenters, Báez said. The basic difference between the two is that a supercenter includes a supermarket.

Supercenters “are the preferred model for consumers in Puerto Rico and the mainland,” Báez told News Is My Business.

That preference is based on the convenience of having both retail store and supermarket under one roof.

The first to change was the Division 1 store in Humacao. It opened as a supercenter in January 2011. The 2013 agenda includes changing two more stores to supercenter status. Báez declined to identify the locations involved.

Currently, there are 12 supercenters in Puerto Rico and six Walmart Division 1 stores in Fajardo, Hatillo, Mayaguez, Guayama, Isabela and Bayamón.

Expand or relocate?
In carrying out the conversion, Walmart has the option of either expanding an existing store or relocating it. The decision on whether it will expand the two stores to accommodate the supercenter, or build a new structure, is still “on the table,” Báez said. Walmart’s Plaza Palma Real store in Humacao opened as a supercenter in January 2011.

Meanwhile, the company is scouting new locations in case it goes with the building option. Báez said that putting up a new supercenter takes a year and the cost involved is around $25 million.

Asked whether the proximity of Sam’s Club in the Bechara Industrial Sector along Kennedy Avenue will hurt the Walmart at Stop 18, Báez replied “they complement each other. Sam’s Club is a wholesale operation that focuses on small and mid-size businesses. The supercenter is geared to individual customers.”

With local purchases contributing to the product diversity that Walmart consumers look for when shopping, expect Walmart to continue expanding this area.

“This is a very important contribution (to the local economy),” Báez said. “In the measure that we open more stores, sales will grow.”

Connection that pays off
Walmart currently carries some 1,200 local products, either manufactured or grown in Puerto Rico.

For local suppliers, establishing a connection with Walmart pays off both in terms of local sales and exports. That’s because Walmart actively promotes local exports through its Walmart’s Supplier Development area.

Báez said this department has been instrumental in channeling requests by companies in Puerto Rico eager to sell their products to Walmarts and Sam’s Clubs in the U.S.. Century Packing, Doña Yiya, and Pan American Grain already are supplying U.S. Walmarts and they will soon be joined by more companies. Báez said Dulzura Borincana, Pasteleria  Los Cidrines and Cafe Yaucono, are close to finalizing negotiations to sell to Walmart in the U.S.

Additionally, there are local suppliers that sell to Walmart in the U.S. through separate brokers or intermediaries, according to Báez. They are Cervecera de P.R., Goya, Bettina, Rovira, Bacardi, and Flanes Elmec.

Built at a cost of $52 million, the Stop 18 store represents the company’s highest investment in a single store in Puerto Rico. Although Walmart has multi-storied stores on the mainland, these buildings were acquired by the company rather than built from scratch, according to Bruni Torres, corporate affairs manager.

“This is the first time we build this type of building,” she said.

Báez compared the SuperAhorros to the “bodegas” or discount stores that Walmart operates in Mexico.

Cooking with My Doctor builds on local success to expand abroad