4th Firehouse Subs location opens in San Patricio Plaza, 8 in the pipeline for ’12 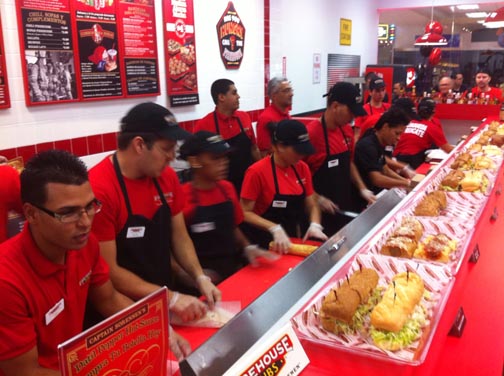 Firehouse Subs is taking on the local market, the first outside the U.S. mainland. Firehouse Subs is taking on the local market, the first outside the U.S. mainland.

The fourth location of the Jacksonville-based Firehouse Subs restaurant chain is officially opening for business on the second level of the San Patricio Plaza mall in Guaynabo today, keeping up an aggressive expansion that will extend well into 2012.

During the Tuesday night inauguration of the restaurant located across from the Caribbean Cinemas movie theaters, Gabriel Laffitte, president of Latin America Subs Inc., which holds the exclusive franchise rights for the chain in Puerto Rico and the rest of the region, told News is my Business that the investment so far is approaching $1.5 million, with more than 150 jobs created.

“We’re proud to open our third Firehouse Subs restaurant in Puerto Rico and we’re thankful for the positive response customers have given us at our Juncos and Plaza las Américas restaurants,” said Laffitte. “We’re counting on the same support for our San Patricio Plaza restaurant.”

Firehouse Subs made its local debut in October, with the opening of the first restaurant in Juncos. A Plaza las Américas location opened last week and another is slated to open at the Los Prados Mall in Caguas late next week. All of the restaurants, which are located inside malls, range from 1,600 to 1,900 square feet.

Eight more Firehouse Subs are slated to open in 2012, with an associated investment of another $6 million, Laffitte said, noting that would represent about 400 additional jobs.

“In fact, the restaurants that we’ve opened so far have already surpassed our expectations,” said Laffitte, adding another location will open in Guaynabo early next year, featuring a stand-alone design with a drive-through window. The Condado area is next on the agenda.

Known for its over-sized portions and piping hot subs, the chain features several specialty subs, such as the “Hook & Ladder” and the “New York Steamer,” that combine premium meats and cheeses piled high atop toasted sub rolls served with fresh produce. The restaurant itself is a tribute to the authentic firefighter heritage of the founding family’s 200 years of firefighting service.

However, Laffitte said Tuesday the company expects to meet that goal well ahead of the established timeframe, to then begin looking outside Puerto Rico to continue expanding the brand to other islands as well as Central and South America.

“We have the rights to all of Latin America and the Caribbean and expect that after we prove in Puerto Rico that it is a solid brand and we’re running it as we should, we’re going to go into other countries,” he said.