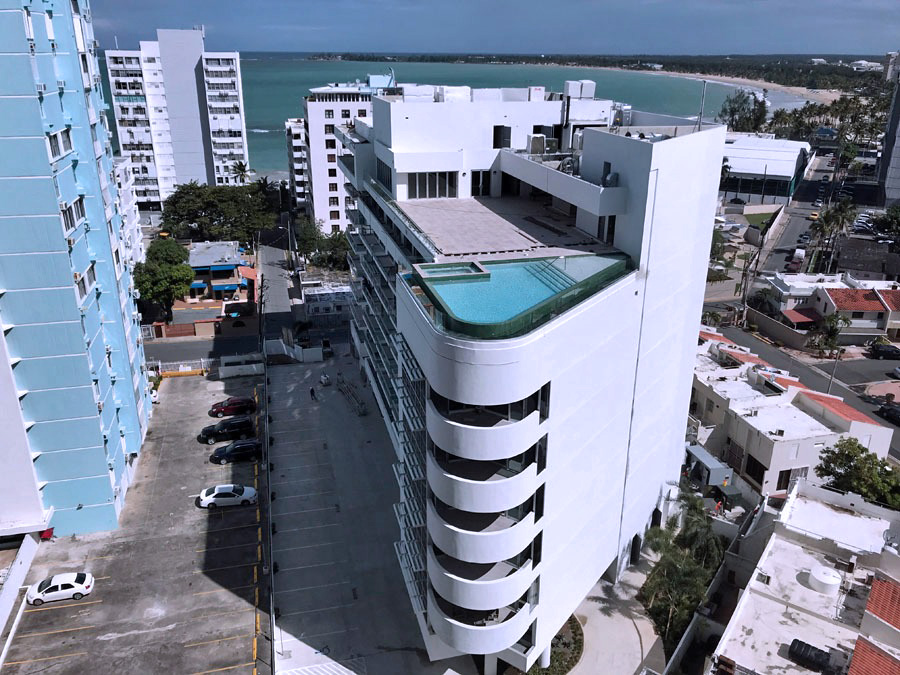 The Jade hotel is currently under construction and should be open for business in the first quarter of 2019.

The St. Clair Collection has officially re-branded its flagship hotel in Isla Verde as Mare, a property that is part of a portfolio that includes six other resorts currently under development, company Founder Keith St. Clair confirmed to this media outlet.

In all, the investment and value of the planned properties is $450 million, he confirmed.

Mare — which has been known as Azul and prior to that, the ESJ Tower — has both regular hotel rooms as well as time-share properties. The hotel component has undergone a massive renovation, and work continues on the time-share aspect, executives said.

Right behind the Mare is the Jade, currently under construction and that should be open for business in the first quarter of 2019. That property will add 112 rooms, a rooftop pool and other amenities throughout its nine floors.

“This is the first new hotel that has been constructed in the Isla Verde sector in 20 years,” St. Clair said of the property facing the Atlantic Ocean.

Meanwhile, construction of the 16-story Noir is also slated to begin next year. The beachfront property will be located on the site of the former Empress Hotel in Isla Verde and will feature 140 rooms.

“When we finish the third hotel in Isla Verde, we’ll have about 750 rooms on Isla Verde beach,” St. Clair said.

St. Clair Collection has more properties in the pipeline, including hotels in Vieques and Cayey. The $70 million Safiro hotel in Vieques, which will be “completely off the grid and independent from the Puerto Rico Electric Power Authority,” will break ground in January, St. Clair confirmed.

The 80-room hotel located on the south side of Vieques in the Esperanza sector will feature 15, three-bedroom villas and a world-class spa. Once completed in October 2020, the property will be the largest on the island municipality, unless the W Vieques reopens after Hurricane María shut it down last September.

In Cayey, St. Clair Collection plans to break ground in March 2019 on the “first mountain resort, which will be exclusive.” The property will feature 100, one-, two-, and three- bedroom villas, 14 residential units, a hotel, a restaurant and a spa.

Over at the Miramar Convention Center District, St. Clair is developing a film production complex featuring sound stages, a film-making university that will be managed by Sacred Heart University, and a backlot, among other features. The campus calls for a $136 million investment that will now include a 300-room hotel, at the request of the government, he said.

A seventh property is also planned, although St. Clair refrained from disclosing details, as it is in the early stages of development.

“With those 300 rooms, plus the hotels in Vieques and Cayey, and the other that we’re going to do that we can’t announce yet, we’ll have about 1,100 to 1,200 hotel rooms in Puerto Rico and about 6,500 direct and indirect jobs,” the executive said.